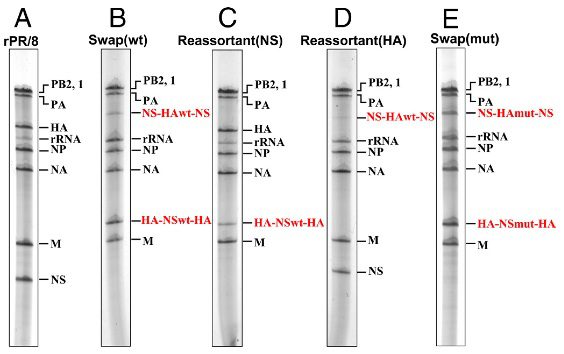 Would influenza virus be the same pathogen if it could not undergo reassortment of its segmented RNA genome? This is the question being asked in the wake of the development of a method to prevent the free assortment of influenza viral RNAs.

The process of influenza virus replication includes the incorporation of eight viral RNAs into each newly synthesized virion. This process, called packaging, depends upon specific RNA sequences in each genome segment. By swapping the packaging sequences for the nonstructural protein (NS) and HA genes, a virus was produced which replicated but lost the ability to independently reassort the HA or NS gene. The authors note that the other influenza A virus RNA segments could be modified in a similar way to reduce or eliminate their ability to form reassortant viruses.

Unfortunately, this scenario is highly improbable. Influenza viruses infect so many animal species that it would be virtually impossible to replace all viruses with a reassortment-defective strain. To predominate, this strain would require a strong selective advantage over wild strains, an unlikely scenario. The fact that the strain is engineered by humans virtually guarantees that it will be less fit than wild viruses, and hence unable to replace them.

Even in the unlikely event that we could devise ways to replace all the influenza virus strains in the world with one that cannot undergo reassortment, it is unlikely that this phenotype would endure. Influenza viruses, like all RNA viruses, undergo high mutation rates as a consequence of error-prone RNA replication. Long before the laboratory-engineered strain circled the globe, mutations would likely occur that restore its ability to undergo reassortment.

There is at least one practical use for a reassortment-defective influenza virus. The infectious, attenuated influenza virus vaccines currently in use could in theory reassort with circulating wild type viruses, leading to the the production of a pathogenic strain. This possibility would be reduced if the attenuated vaccines were engineered so they could not undergo reassortment.

[Technical note: As shown in the figure, influenza reassortment was examined by gel electrophoresis, not PCR. The approach is similar to my method from 1979, with the exception that viral RNAs are detected by silver staining, not autoradiography.]