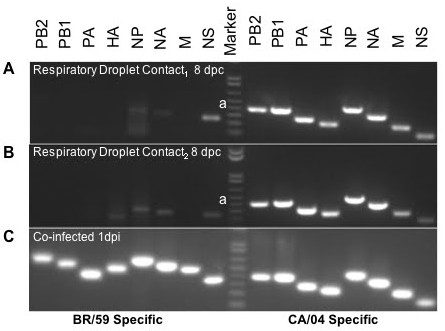 When more than one influenza A virus subtype is circulating in humans, as has been the case since 1977, there are several possible outcomes. The viruses might co-circulate, one virus might out-compete another, or co-infection of cells with two viruses can lead to the production of genetically distinct viruses by the process of reassortment of viral RNAs. Experiments have been done in ferrets to determine how the 2009 pandemic H1N1 strain interacts with seasonal H3N2 and H1N1 viruses.

Ferrets were intranasally co-infected with an H1N1 pandemic strain [Ca/04] and either a seasonal H1N1 virus [BR/59] or a seasonal H3N2 virus [BR/10].  One uninfected ferret was placed in the same cage (to allow contact transmission) and a second in another cage separated by a wire mesh (to allow aerosol transmission). They determined whether the viruses replicated in the animals by detecting viral RNA in nasal washes taken 1 day after infection using polymerase chain reaction (PCR), or by hemagglutination-inhibition assays to measure serum antibodies.

The results are striking. Both viruses replicate well in co-infected ferrets – look at panel C of the image above. The figure is a photograph of the DNA products of the PCR, separated by gel electrophoresis. Each lane shows the DNA corresponding to the individual influenza viral RNA. Panels A and B show the amplified DNAs from the nasal washes of two animals who were infected by contact. In these animals, the pandemic CA/04 virus replicates well (right half) while the seasonal H1N1 strain [BR/59] does not (left half).

When the nasal washes from the respiratory droplet contact ferrets were used to infect a new set of ferrets, only the pandemic CA/04 virus was detected; there was no evidence of the seasonal BR/59 or BR/10 viruses.

The pattern of the DNAs are distinct for each virus. For example, the PB2 DNA of BR/59 migrates more slowly on the gel than the PB2 DNA of CA/04 (panel C). Given these differences in migration of the DNAs, it would be easy to determine if there were reassortants in the co-infected ferrets. None can be detected by this analysis.

If these results were directly applicable to humans, we would predict that the 2009 H1N1 pandemic strain is not likely to reassort with the seasonal strains; and that it will out-compete those strains, which will eventually disappear. But we are not ferrets, and we don’t know whether these findings apply to humans. Nevertheless, the authors are allowed to speculate:

Although we must be cautious interpreting studies in the ferret model, it is reasonable to speculate that this prototypical pandemic strain, Ca/04, has all the makings of a virus fully adapted to humans.

In this case ‘fully adapted’ means that the pandemic strain replicates better than the seasonal strains or any reassortants that might arise in co-infections.

What did the press learn from this work? Reuters concluded:

And while a new study in ferrets suggested the virus spreads more quickly and causes more severe disease than seasonal flu, the good news is that it does not appear likely to mutate into a “superbug” as some researchers had feared.

Virologists consider mutation and reassortment to be two distinct phenomena. The mutation rate of the virus is determined by error-prone RNA synthesis. The host applies the selection pressure that enriches for a particular phenotype. The results of these studies reveal nothing about the ability of the virus to mutate.

Next post: Single dose of 2009 H1N1 vaccine immunogenic in adults

Previous post: Return of swine-origin H1N1 influenza to the US