Now that we have examined influenza viral RNA synthesis, it’s a good time to step back and look at a very important property of this step in viral replication. All nucleic acid polymerases insert incorrect nucleotides during chain elongation. This misincorporation is one of the major sources of diversity that allows viral evolution to take place at an unprecedented scale. Put another way, viruses are so successful because they make a lot of mistakes.

Nucleic acids are amazing molecules not only because they can encode proteins, but because they can be copied or replicated. Copying is done by nucleic acid polymerases that ‘read’ a strand of DNA or RNA and synthesize the complementary strand. Let’s start by examining DNA synthesis. Below is a DNA chain, which consists of the bases A, G, C or T strung together in a way that codes for a specific protein. In this example, the template strand is at the bottom, and consists of the bases A, C, C, T, G, A, C, G, and G (from left to right). A DNA polymerase is copying this template strand to form a complementary strand. So far the complementary bases T, G, G, A, and C have been added to the growingÂ  DNA chain. The next step is the addition of a T, which is the complementary base for the A on the template strand: 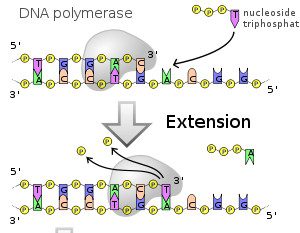 So far all is well. But all nucleic acid polymerases are imperfect – they make mistakes now and then. This means that they insert the wrong base. In the next step below, the DNA polymerase has inserted an A instead of the correct G:

Insertion of the wrong base leads to a mutation – a change in the sequence of the DNA. In general, it’s not a good idea to make new DNAs with a lot of mutations, because the encoded protein won’t function well (but there are exceptions, as well will see). But in this case, there is a solution – DNA-dependent DNA polymerases (enzymes that copy DNA templates into DNA) have proofreading abilities. The proofreader is an enzyme called exonuclease, which recognizes the mismatched A-C base pair, and removes the offending A. DNA polymerase then tries again, and this time inserts the correct G: 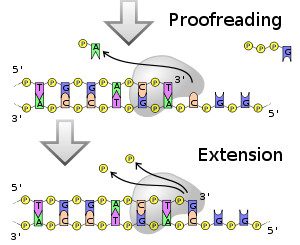 Even though DNA polymerases have proofreading abilities, they still make mistakes – on the order of about one misincorporation per 107 to 109 nucleotides polymerized. But the RNA polymerases of RNA viruses are the kings of errors – these enzymes screw up as often as one time for every 1,000 – 100,000 nucleotides polymerized. This high rate of mutation comes from the lack of proofreading ability in RNA polymerases. These enzymes make mistakes, but they can’t correct them. Therefore the mutations remain in the newly synthesized RNA.

Given a typical RNA viral genome of 10,000 bases, a mutation frequency of 1 in 10,000 corresponds to an average of 1 mutation in every replicated genome. If a single cell infected with poliovirus produces 10,000 new virus particles, this error rate means that in theory, about 10,000 new viral mutants have been produced. This enormous mutation rate explains why RNA viruses evolve so readily. For example, it is the driving force behind influenza viral antigenic drift.

Here is a stunning example of the consequences of RNA polymerase error rates. Tens of millions of humans are infected with HIV-1, and every infected person produces billions of viral genomes per day, each with one mutation. Over 1016 genomes are produced daily on the entire planet. As a consequence, thousands of mutants arise by chance every day that are resistant to every combination of antiviral compounds in use or in development.

I cannot overemphasize the importance of error-prone nucleic acid synthesis in RNA viral evolution and disease production. We’ll spend the next two days examining the consequences of error prone replication. First we’ll consider the implications for viruses as a population, and then we’ll discuss the outcome when a virus produces an RNA polymerase that makes fewer mistakes. Please bear with me as we diverge slightly from influenza virus; these concepts will be an important and enduring component of your toolbox of virology knowledge.