Mutation is an important source of RNA virus diversity that is made possible by the error-prone nature of RNA synthesis. Viruses with segmented genomes, such as influenza virus, have another mechanism for generating diversity: reassortment.

When an influenza virus infects a cell, the individual RNA segments enter the nucleus. There they are copied many times to form RNA genomes for new infectious virions. The new RNA segments are exported to the cytoplasm, and then are incorporated into new virus particles which bud from the cell.

If a cell is infected with two different influenza viruses, the RNAs of both viruses are copied in the nucleus. When new virus particles are assembled at the plasma membrane, each of the 8 RNA segments may originate from either infecting virus. The progeny that inherit RNAs from both parents are called reassortants. This process is illustrated in the diagram below, which shows a cell that is co-infected with two influenza viruses L and M. The infected cell produces both parental viruses as well as a reassortant R3 which inherits one RNA segment from strain L and the remainder from strain M. 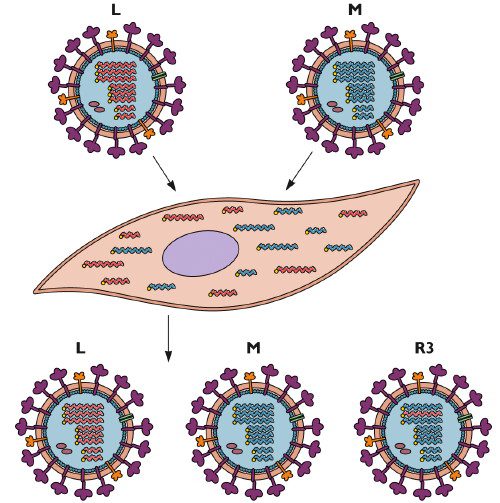 One example of the evolutionary importance of reassortment is the exchange of RNA segments between mammalian and avian influenza viruses that give rise to pandemic influenza. For example, the 2009 H1N1 pandemic strain is a reassortant of avian, human, and swine influenza viruses, as illustrated. 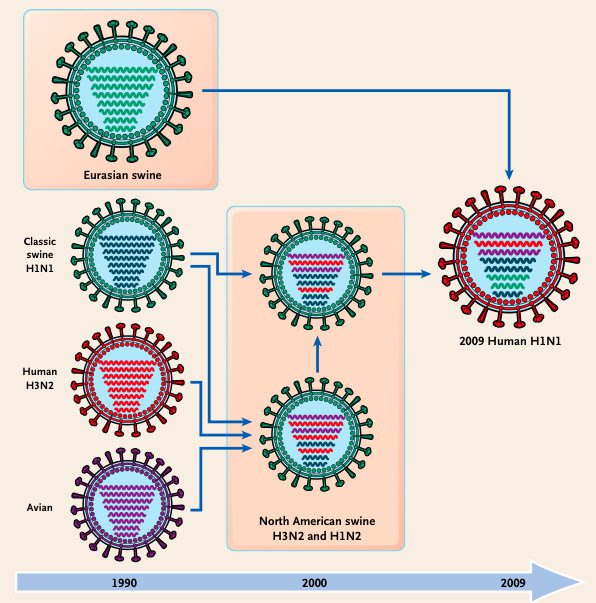 Reassortment can only occur between influenza viruses of the same type. Why influenza A viruses never exchange RNA segments with influenza B or C viruses is not understood. However, the reason is probably linked to the packaging mechanism that ensures that each influenza virion contains at least one copy of each RNA segment.