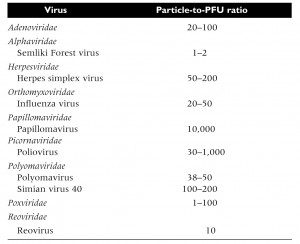 Chris Upton, a contributor to the virology toolbox, has raised an important point about multiplicity of infection:

Perhaps this is a place to bring up particle to pfu ratio? The above is great for when talking about phage, for example, when the ratio approaches 1. But with something like polio when it can be very high (>1000 ??), then it’s not that all cells don’t receive “a particle” at MOI=1 – but that they don’t get an “infectious dose”. Not sure how to say it better – enough to initiate an infection.

So why does polio require 1000 virions to make an infectious dose? I don’t buy the idea that most of the particles are not “viable”.

If we take the titer of a virus preparation (in plaque forming-units per milliliter) and divide it Â into the number of virus particles in the sample, we obtain a number known as the particle-to-PFU ratio. It is a measure of the fraction of virus particles in a given sample that can complete an infectious cycle. For many bacteriophages, the particle-to-PFU ratio approaches 1, which is the lowest value that can be obtained. A value of 1 means that every virus particle in the sample is able to form a plaque.

The linear nature of the dose-response curve indicates that a single virion is capable of initiating an infection. However, the high particle-to-pfu ratio of many viruses shows that not all virions are successful. A high particle-to-pfu ratio is sometimes caused by the presence of noninfectious particles with genomes that harbor lethal mutations or that have been damaged during growth or purification. Another explanation is that although all viruses in a preparation are in fact capable of initiating infection, not all of them succeed because of the complexity of the infectious cycle. Failure at any one step in the cycle prevents completion.

A high particle-to-pfu ratio does not indicate that most particles are defective, but that they failed to complete the infection.