The capacity of RNA viruses to produce prodigious numbers of mutations is a powerful advantage. But remember that selection and survival must balance genetic fidelity and mutation rate. Many mutations are not compatible with viral replication. Consequently, if mutation rates are high, at some point accumulating base changes lead to lethal mutagenesis – the population is driven to extinction. The error threshold is a mathematical measurement of the genetic information that must be maintained to ensure survival of the population. The results of experiments clearly show that RNA viruses evolve close to their error threshold.

The first clues that viruses exist on the edge came from studies in which cells infected with the RNA viruses poliovirus and vesicular stomatitis virus were treated with base analogs that act as mutagens. These compounds, such as 5-azacytidine, are incorporated into the growing RNA chain during replication, leading to incorporation of incorrect bases. Treatment of virus infected cells with such drugs dramatically inhibits the production of new infectious virus particles, but stimulates mutagenesis of the viral RNA by only 2- or 3-fold. When the same experiment is done with cells infected with a DNA virus, the mutation frequency increases by several orders of magnitude.

A direct demonstration of error catastrophe was achieved by treating poliovirus-infected cells with the mutagen ribavirin. Treatment with a concentration of ribavirin that causes a 9.7-fold increase in mutagenesis lead to a 99.3% loss in poliovirus infectivity. A graph of the results shows that poliovirus exists at the edge of viability. 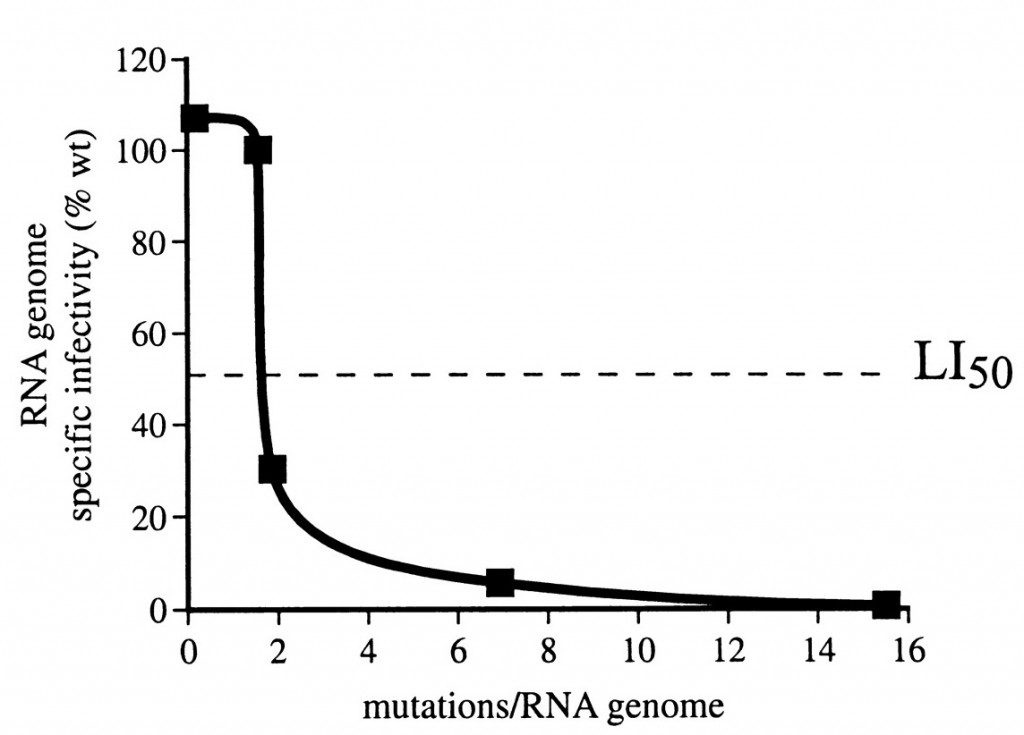 Ribavirin pushes poliovirus beyond the error threshold because it causes the RNA polymerase to make more errors than it already does. What would be the property of a poliovirus mutant resistant to this drug? A poliovirus mutant resistant to ribavirin was selected by passing the virus in the presence of increasing concentrations of the drug. Resistance to ribavirin is caused by a single amino acid change, G64S, in the viral RNA-dependent RNA polymerase. RNA synthesis of ribavirin-resistant poliovirus is characterized by fewer errors, in the absence of drug, compared with the parental virus. Therefore the mechanism of resistance to the mutagen ribavirin is achieved through an amino acid changes that makes a viral RNA polymerase with greater fidelity.

Now that we have an RNA polymerase that makes fewer errors, we can use it to limit viral diversity and test the theory that viral populations, not individual mutants, are the target of selection.