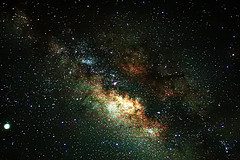 How many different viral genomes are present at any given time? Here is an interesting calculation in Virus Dynamics by Martin A. Nowak and Robert McCredie May (Oxford University Press):

Suppose that the average virus load in an (untreated) HIV infected person is 1010 particles and that this amout of virus particles is produced every day. Thus in 10 years, an HIV infected individual could generate about 1013 virus particles. All HIV infected people in the world could generate up to 1020 virus particles in the course of 10 years. If we assume that only 1% of the nucleotides in the HIV genome are variable (which is a gross underestimation), then there would be about 1060 HIV mutants that coincide in 99% of their genetic sequences. Thus the worldwide pandemic would only produce a fraction 10-40 of all such variants during 10 years. While HIV is extremely variable, at any one time only a minute fraction of all possible variants is present worldwide.

Most of the HIV virions produced in an infected individual appear to be nonviable, suggesting that the population exists at its error threshold. What would happen if we could push replicating genomes over the error threshold?