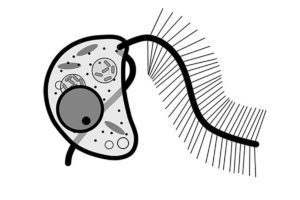 Virophages (the name means virus eater) were first discovered toÂ replicate only inÂ amoeba infected with the giant mimiviruses or mamaviruses.Â Â TheyÂ reduce yields of the giant viruses, and also decrease killing of the host cell. Another virophage called mavirus has been found to integrate into the genome of its host and behaves like an inducible antiviral defense system (link to paper).

The host cell of the virophage mavirus is Cafeteria roenbergensis, Cro (pictured), aÂ marine phagotropic flagellate, that is infected with the giant virus CroV (Cafeteria roenbergensis virus). When Cro cells are infected with a mixture of mavirus and CroV, the virophage integrates into the host cell genome. There it remains silent; the cells survive, and no virophage particles are produced. Such cells can be called lysogens, a name applied to bacteria containing integrated bacteriophage genomes, or prophages.

How does the mavirus genome integrate into the Cro cell? The viral genome encodes an integrase, an enzyme that cuts host DNA and inserts a copy of the viral genome. RetrovirusesÂ achieve the same feat via an integrase.

When Cro-mavirus lysogens are infected with CroV, the integrated mavirus genome is transcribed to RNA, the viral DNA replicates,Â and new virus particles are formed. These virophages inhibit the replication of CroV by 100-1000 fold. As a consequence, the host cell population survives.

These findings suggest that the virophage mavirus is altruistic: induction of the integrated genome leads to killing of the host cell, but other members of the cell population are protected. Altruism is not unknown in Nature, but how it evolved is an intriguing question.

All this work was done in a laboratory. It will be necessary to determine if integration of mavirus into Cro cells in the wild has any influence on the ecology of these organisms.