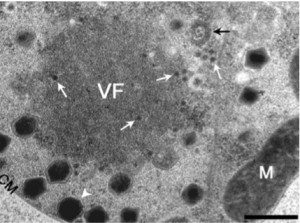 The second virophage is called Mavirus (for Maverick virus – because the viral DNA is similar to the eponymous DNA transposon). Mavirus was identified in the marine phagotropic flagellate Cafeteria roenbergensis infected with – you guessed it – a giant virus, CroV.Â  Like Sputnik, Mavirus cannot replicate in C. roenbergensis without CroV, and it also reduces the yield of CroV particles produced. The figure shows a viral factory (VF) in C. roenbergensis surrounded by large CroV particles (white arrowhead) and the smaller Mavirus particles (white arrows).