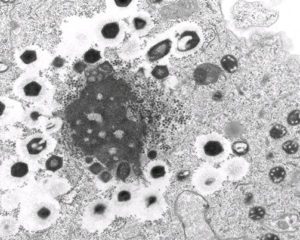 A battle is brewing between two research groups in Marseille, France that are involved in the discovery and study of giant viruses. Didier Raoul and colleagues believe that they have discovered a CRISPR-like, DNA based defense system in mimivirus that confers resistance to virophage (paper link). Claverie and Abergel disagree: they think that the defense system involves proteins, not nucleic acids (paper link).

Virophages are DNA viruses that can only replicate in cells infected by giant viruses like mimivirus. Their name, which means â€˜virus eaterâ€™, comes from the observation that they inhibit mimivirus replication. A specific virophage called Zamilon was discovered that can inhibit the replication of lineage B and C mimivirus but not lineage A.

Examination of the DNA sequences of 60 different mimivirus strains revealed that the genomes of lineage A contained a 28 nucleotide sequence identical to Zamilon virophage. This sequence was not found in any lineage B mimivirus and in only one out of 19 lineage C mimiviruses. In addition, a 15 nucleotide subset of this sequence is repeated four times in the lineage B and C mimivirus genomes.

Near the 15 nucleotide Zamilon-derived repeated sequences in lineage B and C mimivirus genomes are genes encoding several proteins related to components of the bacterial CRISPR-Cas system. These include a nuclease, an RNAse, and an ATP-dependent DNA helicase.

The CRISPR system provides defense against invading DNA. When a foreign DNA, such as a bacteriophage genome, enters a bacterial cell, some is fragmented and integrated into the CRISPR locus as a â€™spacerâ€™ (sequences in the foreign DNA are called â€˜protospacersâ€™). Following transcription, CRISPR RNAs (crRNA) are processed by a multiprotein complex to produce ~60 nucleotide RNAs. When the spacer of a crRNA base pairs with a complementary sequence in an invading DNA molecule, CRISPR-associated endonucleases cleave the DNA. The integration of the sequences of the invading DNA into the host cell genome, from which they can be mobilized in the form of crRNAs, provides a form of â€œmemoryâ€ and acquired immunity. It should be noted that there are six known types of CRISPR systems that differ in their components and mechanisms.

The authors provide experimental support for their hypothesis by showing that silencing the genes encoding the endonuclease, the helicase, and the repeated insert using siRNA allows Zamilon replication in mimivirus-infected cells.

Claverie and Abergel think that Raoult and colleagues are wrong (paper link). They provide three reasons to dispute their findings, and ‘propose a simpler protein-based interaction model that explains the observed phenomena without having to extend the realm of adaptive immunity to the world of eukaryotic viruses, a revolutionary step that would require stronger experimental evidences.â€™

The first problem is that mimivirus and Zamilon virophage replicate in the same location in the infected cell, making a CRISPR-like defense system difficult to conceptualize. In contrast, CRISPR sequences reside in the bacterial genome, from which RNAs are produced that target the destruction of invading DNAs elsewhere in the cell.

The second problem is that the Zamilon sequences in the mimivirus genome are not regularly spaced or flanked by recognizable repeats, a hallmark of the CRISPR system (the name stands for â€˜clustered regularly interspersed short palindromic repeats). However it should be noted that type VI CRISPR systems have no CRISPR locus and likely function via mechanisms that are different from other CRISPR systems.

Finally, Claverie and Abergel argue that there is no way for the proposed nucleic acid defense system to distinguish between the virophage and the virophage sequences in the mimivirus genome. In some CRISPR systems this discrimination is achieved by protospacer adjacent motifs (PAMs), short (2-5 nt) sequences next to the invader protospacer sequences that are recognized by the endonuclease complex guided by the crRNA. PAMs are not present in the bacterial genome, sparing it from endonucleolytic cleavage. Nevertheless, non PAM-based mechanisms of discriminating invader from host are known, for example, in the type III CRISPR system.

If Raoult and colleagues have not discovered a CRISPR-like mimivirus defense system, then why would silencing the genes encoding CRISPR-like proteins allow Zamilon replication? Claverie and Abergel think that it is not the 15 nucleotide Zamilon repeats that are important to mimivirus, but the encoded amino acids: Asp-Asn-Glu-Ser (DNES in one letter code). They believe that DNES is a motif present in proteins that block Zamilon replication by as yet unidentified mechanisms.

Many cellular proteins have been identified that interfere with virus replication, such as those encoded by interferon induced genes (ISGs). DNES containing proteins that inhibit Zamilon replication would be conceptually analogous, except that they are encoded by a virus, not the host.

Claverie and Abergele appear to have a strong case that mimivirus defense against Zamilon virophage is mediated by protein, not nucleic acid, but further experimentation is certainly needed to support their position. Nevertheless they recognize that the discovery by Raoult and colleagues “remains fascinating even if it falls short of demonstrating the existence of a CRISPR-Cas-like adaptive immune systemâ€.