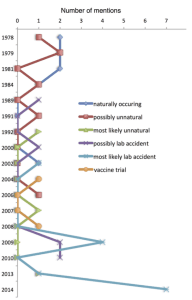 The individuals who believe that certain types of gain-of-function experiments should not be done because they are too dangerous (including Lipsitch, Osterholm, Wain-Hobson,) cite the 1977 influenza virus H1N1 strain as an example of a laboratory accident that has led to a global epidemic. A new analysis shows that the reappearance of the 1997 H1N1 virus has little relevance to the gain-of-function debate.

Human influenza viruses of the H3N2 subtype were circulating in May of 1977 when H1N1 viruses were identified in China and then Russia. These viruses spread globally and continue to circulate to this day. The results of serological tests and genetic analysis indicated that these viruses were very similar to viruses of the same subtype which circulated in 1950 (I was in the Palese laboratory in 1977 when these finding emerged). Three hypotheses were suggested to explain the re-emergence of the H1N1 virus: a laboratory accident, deliberate release, or a vaccine trial.

Rozo and Gronvall have re-examined the available evidence for the origin of the 1977 H1N1 virus. While there is ample documentation of the extensive work done during the 1970s in the Soviet Union on biological weapons, there is no evidence that Biopreparat had attempted to weaponize influenza virus. The release of the 1977 H1N1 virus from a biological weapons program is therefore considered unlikely.

It is more likely that the 1977 H1N1 virus was released during testing of influenza virus vaccines. Many such trials were ongoing in the USSR and China during the 1960s-70s. C.M. Chu, a Chinese virologist, told Peter Palese that the H1N1 strain was in fact used in challenge studies of thousands of military recruits, an event which could have initiated the outbreak.

The hypothesis that the 1977 H1N1 virus accidentally escaped from a research laboratory is formally possible, but there are even less data to support this contention. Shortly after this virus emerged, WHO discounted the possibility of a laboratory accident, based on investigations of Soviet and Chinese laboratories. Furthermore, the H1N1 virus was isolated at nearly the same time in three distant areas of China, making release from a single laboratory unlikely.

It is of interest that with the onset of the gain-of-function debate, which began in 2011 with the adaptation of influenza H5N1 virus to aerosol transmission among ferrets, the ‘laboratory accident’ scenario for the emergence of the 1977 strain has been increasingly used as an example of why certain types of experiments are ‘too dangerous’ to be done (See graph, upper left). For example, Wain-Hobson says that ‘1977 H1N1 represented an accidental reintroduction of an old vaccine strain pre-1957, probably from a Russian research lab’. Furmanski writes that ‘The virus may have escaped from a lab attempting to prepare an attenuated H1N1 vaccine’. In the debate on gain-of-function experiments, the laboratory escape hypothesis is prominently featured in public presentations.

The use of an unproven hypothesis to support the view that some research is too dangerous to do is another example of how those opposed to gain-of-function research bend the truth to advance their position. I have previously explained how Lipsitch incorrectly represented the results of the H5N1 ferret transmission studies. We should not be surprised at this tactic. After all, Lipsitch originally called for a debate on the gain-of-function issue, then shortly thereafter declared that the moratorium should be permanent.

Rozo and Gronvall conclude that the use of the 1977 influenza epidemic as a cautionary tale is wrong, because it is more likely that it was the result of a vaccine trial and not a single laboratory accident:

While the events that led to the 1977 influenza epidemic cannot preclude a future consequential accident stemming from the laboratory, it remains likely that to this date, there has been no real-world example of a laboratory accident that has led to a global epidemic.