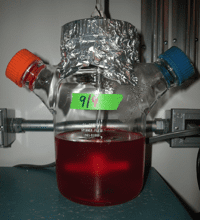 We have been using HeLa cells in my laboratory since 1982, when I arrived at Columbia University Medical Center fresh from postdoctoral work with David Baltimore at MIT. I brought with me a line of HeLa cells and used them for 30 years for our research on viruses. Here is a story of how we lost the cells and then found them ten months later.

As everyone knows, the continuous HeLa cell line was derived from a cervical tumor taken from Henrietta Lacks in 1951 (if you don’t know the story, you should read Rebecca Skloot’s The Immortal Life of Henrietta Lacks, or my shorter summary). When I arrived at the Baltimore lab in 1979, they were using cells derived from the S3 clone of HeLa cells that had been produced by Philip Marcus in the 1950s. I write ‘derived from’ because someone at MIT had further Â cloned the S3 line and selected one that was particularly susceptible and permissive to poliovirus infection. This was the cell line that I took with me to Columbia in 1982.

Because we use so many HeLa cells each week, we grow them in spinner cultures (pictured). The cells are suspended in a glass bottle in nutrient medium and continuously stirred by a magnetic bar. The spinner bottle is placed on top of a stir plate, which contains a motor that drives a rotating magnet that in turn spins the bar in the bottle. When we need to produce monolayers of cells for experiments, we remove cells from suspension and plate them on plastic dishes. The HeLa S3 clone that we use grows very well in suspension and also forms excellent monolayers on plastic dishes.

Over the years we used the HeLa S3 subclone to conduct experiments with poliovirus, echoviruses, Coxsackieviruses, enteroviruses, rhinoviruses, and encephalomyocarditis virus. The cells could be infected with all these viruses, develop cytopathic effects, and form plaques, allowing titration of virus titers. They have been an essential part of my laboratory. The Wall of Polio is just one example of how important these cells have been for our work.

In December 2012, the spinner went down. The drive belt that turns the magnet in the spinner platform broke overnight; the cells settled out and died. Normally we would simply go to our stock of cells frozen in liquid nitrogen, thaw them out, and be up and working again within a week. Unfortunately, our liquid nitrogen tank had run dry one week in the summer of 2012, and all the cells had died. We tried recovering some of the HeLa cells that were frozen, but what grew out were not the same as our S3 subclone.

In the course of the next 9 months we tried HeLa cells from many different sources – laboratories here at Columbia, the American Type Culture Collection, and our colleagues elsewhere. None of the HeLa cells performed like our S3 subclone. Some HeLa lines did not grow well in spinner; others did, but formed poor monolayers. Still others did not support replication or plaque formation when infected with viruses we work on now – poliovirus, rhinoviruses, and encephalomyocarditis virus. I located former members of the Baltimore laboratory, hoping that they had taken the special HeLa cells with them, but I came up empty handed.

A few weeks ago I received an email from a former student who had heard my pleas for HeLa cell help on This Week in Virology. She remembered bringing some of our HeLa cells to her postdoctoral laboratory in Canada, and freezing them down when she left. I contacted the laboratory and found to my delight that our HeLa cells were indeed frozen there; a kind member of the laboratory grew up a stock of the cells, froze them, and shipped them off to us. I received them a week ago and put them into culture. They were the HeLa cells that I used to know: I recognized their morphology immediately. They grew beautifully as monolayers, and just today I set up a spinner culture. We are all looking forward to using the cells in our virology experiments.

Meanwhile, I have a large stock of belts for the magnetic spinner plate (I had to buy seventeen of them, to meet the $50 minimum order); I have placed 6 vials of the cells in our liquid nitrogen tank; and I plan to freeze additional vials in my colleagues’ freezers in case ours goes down again.

There are several lessons to be learned from this saga. First, because virologists are completely dependent on cells, they must take care that they have a reliable stock. This means having someone in the lab checking the level of liquid nitrogen every day, and ordering a new tank when the level is low. Second, it’s important to keep stocks of cells frozen elsewhere. We were very lucky to find them in Canada. Third, HeLa cell lines are very different. Finally, HeLa cells are special. I don’t know of any other cell line that grows well in spinner, makes beautiful monolayers, and allows us to work with so many different viruses. Thank you, Henrietta Lacks.