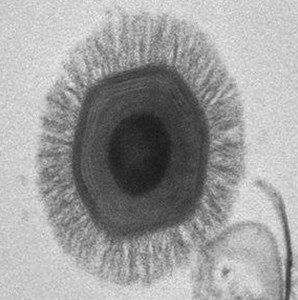 To search for giant viruses in humans, respiratory samples from 196 Tunisian patients with community-acquired pneumonia were co-cultured with the amoebaeÂ AcanthamoebaÂ polyphaga. One sample, a bronchial aspirate, yielded a new Megavirus that was given the catchy name LBA111. The patient from which LBA111 was isolated had been hospitalized with fever, cough, shortness of breath, and bloody sputum. Serum from this patient, but not from those of 50 healthy blood donors, reacted with LBA111 proteins, Â suggesting that this individual had been infected with the virus.

Mimivirus LBA111 is not likely to be a contaminant introduced from the laboratory in which it was isolated, because its genome sequence is original. The LBA111 genome is double-stranded DNAÂ 1,230,522 base pairs in length, mostly closely related to the genome ofÂ Megavirus chilensis, a giant virus isolated off the coast of Chile. In addition to other differences, theÂ LBA111 genome encodes two Â tRNAs (histidine and cysteine) not present in the genome ofÂ M. chilensis.

While these findings indicate an association of Mimivirus LBA111 with human pneumonia, they do not prove that this virus is the causative agent of human disease. However, the possibility that Mimivirus causes human disease makes sense. Mimiviruses are present in soil and water where they multiply in amoebae. A known agent of human respiratory disease,Â Legionella pneumophila, also colonizes amoebae. Antibodies to Mimivirus, as well as Mimivirus DNA, have been found in patients with pneumonia.Â Mimivirus should therefore be added to the list of agents that should be considered in patients with pneumonia.