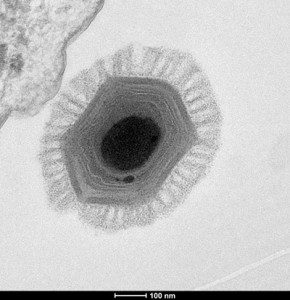 The mantle of world’s biggest virus has passed from Mimivirus to Megavirus. But in this case, size doesn’t matter. It’s the genes that these viruses share and do not share that make this story important.

The discovery of Mimivirus in a French cooling tower amazed virologists. At 750 nanometers in diameter, it dwarfed all other known viruses and shattered the notion of viruses as ‘filterable agents’. That definition came from using filters that exclude any particle larger than 200 nanometers. The 1.2 million base pair Mimivirus DNA genome was found to encode 979 proteins – more than any other virus. This treasure chest included some proteins never found in any viral genome, such as amino-acyl tRNA synthetases, the enzymes that attach amino acids to transfer RNAs in preparation for protein synthesis. Many other cellular genes were also encoded in the Mimivirus genome, as well as proteins that had never been seen before. This discovery led to the idea that Mimivirus evolved from an ancestral cellular organism by losing genes. The alternative idea is that viruses are ‘pickpockets’ – they began as small pieces of DNA that escaped from cells, acquired a capsid, and then slowly stole genes from other organisms.

The problem with the idea that Mimivirus is a gene loser is that it was the only really big virus of its kind – until Megavirus was discovered in the ocean off the coast of Chile. At 680 nm in diameter, Megavirus is slightly smaller than Mimivirus, but the DNA genome is larger – 1,259,197 base pairs versus 1,182,000. The Megavirus genome encodes 1,120 putative proteins compared with 979 for Mimivirus. What is significant about Megavirus is that its genome resembles that of Mimivirus, including the presence of cellular genes such as those encoding amino-acyl tRNA synthetases. Also important is the fact that 258 of the Megavirus proteins have no counterparts in Mimivirus, including three amino-acyl tRNA synthetases.

When Mimivirus was first discovered, it was not clear if it was an anomaly, or if it would provide information on the emergence of viruses. Other giant viruses were subsequently discovered, but they were either nearly identical to Mimivirus (Mamavirus) or little genome sequence was available (Terra, Courdo, Moumou). The evolutionary distance of Megavirus and Mimivirus is sufficient to allow identification of similar features and the selection forces that lead to their emergence. A comparison of their DNA sequences reveals a set of genes in common between the two viruses, such as those that function during protein synthesis. These observations suggest that Megavirus and Mimivirus arose from a common cellular ancestor – one that could carry out protein synthesis – and lost the genes that were no longer needed. The alternative scenario, that these giant viruses started out small and acquired additional genes, seems unlikely. Seven different gene acquisition events would have been needed to acquire just the genes encoding amino-acyl tRNA synthetases.

More details about how Megavirus and Mimivirus emerged from a cellular ancestor will require the isolation of other giant DNA viruses. Which leads to the inevitable question – what is the biggest virus on earth? Have we reached the limit of viral genome size? Probably not, but I doubt that we will find viruses with much larger genomes that encode almost all the genes needed for independent replication. Such viruses likely evolved from primitive cells a very long time ago, and only the evolutionary descendants remain on Earth today.

If you are wondering how these giant viruses are named, the authors provide revealing background:

We believe it is useful and desirable that the name of a newly isolated microorganism convey some of its most distinctive properties. After the initial naming of Mimivirus (for â€œmicrobe mimickingâ€), already not a very good name because the prefix â€œmimiâ€ does not convey a helpful scientific notion, newly isolated related viruses are receiving increasingly random/funny names such as â€œMamavirus,â€ â€œMoumouvirus,â€ â€œCourdovirus,â€ and â€œTerraâ€. …we believe the current trend is counterproductive and should give way to more informative names….a distinctive feature of the above giant viruses (or of their close ancestors) is to possess genome in excess of a â€œmegabaseâ€. Hence, the term â€œMegavirus,â€ and the proposed family/genus â€œMegaviridaeâ€ that will be proposed… â€œChilensisâ€ then refers to the location where this virus was first isolated.

The authors did not incorporate the species of the viral host in the name of the virus. They justify this break with tradition because the natural host of Â Megavirus chilensis is not known – it was isolated from the ocean by co-culture with acanthamoeba, a procedure the authors will continue to use to identify giant DNA viruses.