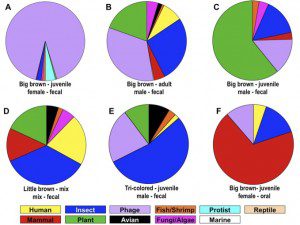 How large is the zoonotic pool – all the animal viruses that could one day infect humans? Assuming that there are 50,000 vertebrates on earth, each with 20 viruses, the number is one million – probably a vast underestimate. Determining just how many viruses exist in a variety of animal species is technically feasible, limited only by the number of hosts that can be sampled. A study of the virome of several North America bats reveals that these animals – which constitute 25% of all the known mammalian species – harbor a very large collection of viral sequences.

Advances in nucleotide sequencing technologies (deep sequencing) have made it possible in recent years to study the virome – the genomes of all viruses in a host – in human blood, diarrhea, and respiratory secretions; grapevines, and feces of horses and bats. The latter mammals are a particularly important subject because it is known that they harbor the predecessors of several important human viruses, including SARS coronavirus, ebolavirus, marburgvirus, Nipah, Hendra, and rabies viruses. Since there are about 1200 known species of bats, the potential for future human zoonoses is significant.

The 576,624 sequence â€˜readsâ€™ (a read is the result of a single sequence reaction, in this study ~250 nucleotides) on six pools of fecal samples revealed an amazing diversity of viral sequences (figure), with representatives of human, other mammals, insect, bacteriophage, fish, shrimp, protist, reptile, plant, avian, fungi, algae, and marine viruses. Among the interesting findings are sequences of three novel coronaviruses from big brown bats. Many coronaviruses have previously been found in bats; the results of this study provide more evidence that these mammals are likely to be sources of future human infections.

Novel viruses of plants and insects were also identified in fecal samples from all bats. This observation can be explained by the batsâ€™ prodigious appetite for insects, which harbor both insect or plant viruses (the latter transmitted to plants by insect vectors). It seems unlikely that these viruses replicate in bats, but pass through the gastrointestinal tract into the feces.

Perhaps not surprisingly (given the diversity of bacteria that colonize mammalian intestinal tracts), sequences of novel bacteriophages were also identified in fecal samples. One appears to have high sequence identity with a bacteriophage that infects the plague bacterium Yersina pestis. Curiously, such bacteria are not known to colonies animals in the northeastern United States. A second bacteriophage infects strains of E. coli associated with human illnesses. These findings suggest that bats could be involved in the spread of human bacterial pathogens.

The main viral sequences identified in pooled oral samples were of a novel cytomegalovirus. These viruses appear to be common in bats, and have been been detected in many previous studies.

One question that arises from these findings is whether bats are unique in harboring a large collection of diverse viruses. The answer to this question awaits studies of the viromes of other wild animals.

Viral discovery by massive sequencing will no doubt identify many new viruses in a wide range of species. However, this technology cannot answer some of the more intriguing biological questions, such as which hosts support viral replication, and whether it is associated with disease. Answers to these questions will require construction of complete DNA copies of viral genomes and recovery of infectious viruses by transfection of cells in culture.

The title of this post is ‘Bats harbor many viral sequences’, not ‘many viruses’. That’s because no infectious viruses were identified – only parts of their genomes. If you wish to conclude that a certain virus infects bats, you must either isolate the virus in cell culture, or show that the entire viral genome is present in tissues or fluids.

*including Eric F. Donaldson and Matt Frieman, who spoke about this work on TWiV 90 andÂ 65.