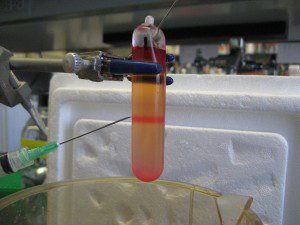 The development of recombinant DNA methods by Cohen and Boyer in 1973, together with the discovery of reverse transcriptase by Temin and Baltimore in 1970, made it possible to introduce a mutation at any location in a viral genome. The essential reagent is an infectious DNA clone, a double-stranded DNA copy of the viral genome carried in a bacterial plasmid. These DNAs (or RNAs produced from them) can be introduced into cells by transfection1 to produce infectious virus.

Since these early findings, infectious DNAs of members of nearly every virus family have been reported. Some have been more difficult to produce than others. For example, to recover infectious influenza virus from cloned DNA, an expression system is used in which cloned DNA copies of the eight RNA segments are flanked by two promoters. Upon introduction of the eight plasmids into cultured cells, two types of RNAs are produced: mRNAs for the synthesis of viral proteins, and viral RNAs for replication and incorporation into virions. The production of infectious DNAs ofÂ  (-) strand RNA viruses was counterintuitive. The (-) strand genomic RNA of these viruses is not infectious because it cannot be translated or copied into mRNA in the cell. In the first attempts, full-length (-) strands, produced by in vitro transcription of cloned DNA, were introduced into cells that produce the proteins required for mRNA synthesis. However, no infectious virus was recovered. The solution, found first with rabies virus, was to transfect full-length (+) strand RNA into cells that produce the viral nucleocapsid protein, phosphoprotein, and polymerase. In these cells, the (+) strand RNA is copied into (-) strand RNAs which then initiate an infectious cycle.

The complete genomes of many DNA viruses, including polyomaviruses, papillomaviruses, and adenoviruses, are sufficiently small to be carried in plasmid vectors. However, conventional plasmid vectors cannot accommodate the larger DNA genomes of herpesviruses and poxviruses; therefore cosmids and bacterial artificial chromosomes vectors, which can accept larger inserts, have been used. Such vectors have also been used to carry DNA copies of the largest RNA genomes, those of members of the Nidovirales. Poxvirus DNA is not infectious, because cellular DNA-dependent RNA polymerase cannot recognize the viral promoters. Viral DNA-dependent RNA polymerase and transcription proteins must therefore be provided.

The infectious viral DNA clone is a double-edged sword.Â  It enables manipulation of the viral genome at will, allowing unprecedented genetic analysis and the use of viruses as vectors for gene therapy. But nearly any virus can now be recovered from the nucleotide sequence – effectively making it impossible to ever truly eradicate a virus from the globe.