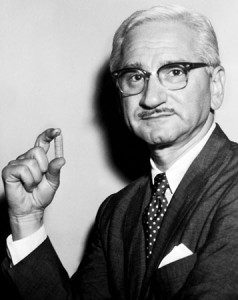 The contamination of the rotavirus vaccine Rotarix with porcine circovirus 1 DNA was revealed by deep sequencing. The same technique was also used to demonstrate that oral poliovirus vaccine does not contain viruses that can cause poliomyelitis.

The oral poliovirus vaccine strains developed by Albert Sabin (pictured) were licensed in the United States in 1962, and over the next 37 years immunization with these vaccines lead to the eradication of poliomyelitis in this country. During that period, the vaccine was responsible for 5-10 cases of poliomyelitis each year, either in recipients of the vaccine or in their contacts. Some of these individuals have sued the manufacturers of the vaccine, claiming that they made a defective product.

OPV contains three different poliovirus strains which were selected by Sabin because they do not cause poliomyelitis. We call such vaccine strains avirulent or attenuated. The mutations in the genetic information of the virus that prevent the development of paralysis have been identified. Unfortunately, these mutations are unstable. After oral administration, OPV replicates in the intestinal tract. During this phase the vaccine viruses undergo genetic change and eventually lose the mutations that made them avirulent. As a consequence, nearly every infant who receives OPV sheds in the feces polioviruses that are significantly more neurovirulent than those that were ingested.

Vaccine-associated poliomyelitis is caused by vaccine revertants that accumulate in the alimentary tract of immunized individuals. These neurovirulent viruses arise not because the vaccine is improperly prepared, but as a consequence of mutation during replication in the intestine. Proving this point to lay juries has been difficult. Now deep sequencing of poliovirus vaccine can show whether or not vaccine preparations are contaminated with neurovirulent viruses. 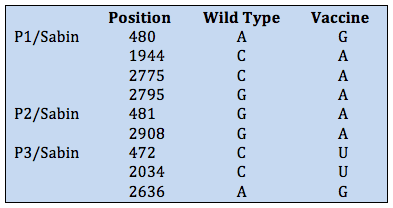 The results of sequence analysis show that the Bharat vaccine does not contain any of the ‘wild type’ bases at these nine positions. Any vaccine-associated poliomyelitis associated with this vaccine is not a consequence of faulty production, but the fact that vaccine strains mutate during replication in the human gut.

There have been many lawsuits involving vaccine-associated poliomyelitis in which plaintiffs claim that the OPV was incorrectly manufactured, leading to a product of unacceptably high neurovirulence. Deep sequencing analysis of these lots of vaccine could have resolved this claim in a way that a lay jury could understand.