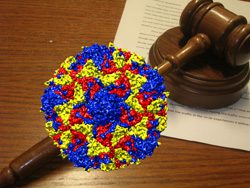 The oral poliovirus vaccine strains (OPV) developed by Albert Sabin were licensed in the United States in 1962, and over the next 37 years immunization with these vaccines lead to the eradication of poliomyelitis in this country. During that period, the vaccine was responsible for 5-10 cases of poliomyelitis each year, either in recipients of the vaccine or in their contacts. Some of these individuals have sued the manufacturers of the vaccine, claiming that they made a “defective product.” My experience as an expert witness in a recent poliovirus vaccine litigation illustrates how difficult it can be for a jury to understand complex scientific issues in cases where there typically is no dispute that the product caused the injury.

My most recent experience involved a case in New York that began early in May 1979, when the plaintiff’s daughter received her second dose of Orimune (the trade name for the live, oral trivalent poliovirus vaccine previously produced by Lederle Laboratories). Approximately 6 weeks later, the plaintiff developed severe back pain and then permanent paralysis of both legs. I will focus on one of the many claims of his lawsuit against Lederle Laboratories: that the vaccine failed to comply with the release standards previously set by the Food and Drug Administration (FDA) for monkey neurovirulence testing, which must be conducted on each monovalent lot, or “monopool,” of vaccine. (OPV is no longer used in the United States for routine immunizations, and the FDA’s regulations on testing the vaccine have been repealed.)

The Sabin poliovirus vaccine strains are prepared by separately growing each of the three viral serotypes in primary monkey kidney cells. Before the vaccines can be released, they are tested by both the manufacturer and the FDA for neurovirulence by injecting samples of the monopools directly into the brains and spinal cords of monkeys. Three weeks after inoculation, the animals are sacrificed, and histological sections are prepared and examined by a pathologist for evidence of cell damage caused by poliovirus. The lesions are scored on a scale of 0 to 4, depending on the extent of cell destruction caused by poliovirus. Each monkey is then given a neurovirulence score, which is expressed as ‘severity’ (the lesion score at the site of inoculation) and ‘spread’ (the lesion score distal to the site of inoculation). These scores are then compared with all the values historically obtained in monkey neurovirulence testing conducted using a reference strain of poliovirus.  The FDA’s regulations allowed the monopools to be used in the further manufacture of vaccine only if their neurovirulence in monkeys did not exceed the neurovirulence of the reference preparation.

The plaintiff claimed that one of the two type 3 monopools that were likely part of his daughter’s vaccine was excessively neurovirulent. In particular, the plaintiff argued that the FDA’s intraspinal neurovirulence test on one of these type 3 pools revealed a single monkey with a severity-spread score of 3-3. No monkeys with a 3-3 score had been observed on Lederle’s intraspinal test of this vaccine monopool. Plaintiff claimed that this monovalent pool should not have been released under the FDA’s standards, because a monkey with a severity-spread score of 3-3 had never been observed previously on intraspinal testing of the reference strain.

From a scientific point of view, the plaintiff’s claims are, in my view, insupportable.

First, claims about the type component of the vaccine do not appear to be scientifically relevant unless the plaintiff’s polio was caused by type 3 poliovirus.  In this case, type 3 poliovirus was isolated in the plaintiff’s stool shortly after the onset of paralysis, demonstrating that type 3 virus was replicating in his digestive tract.  But complement fixation tests conducted on blood samples also demonstrated a vigorous antibody response to type 2 poliovirus before any response was detected to type 3 poliovirus.  From this evidence, I do not think that it can be said that the plaintiff’s infection of his spinal cord was caused by type 3 virus, as opposed to type 2 virus. The jury reached a different conclusion which in my view is not supported by the scientific evidence.

Second, a single monkey with a 3-3 neurovirulence score appears to have played an important role in this case, but that ignores the fact that there are almost always wide variations that result in “outliers” whenever biological assays are involved.  We have studied poliovirus infection of mice in my laboratory, for example, and outliers are common – the one mouse in twenty that becomes ill or dies, while the others remain well. Other investigators have shown that poliovirus recovered from the spinal cord of an outlier monkey – one with a 3-3 neurovirulence score – does not produce these results when re-injected in a different group of monkeys. The monkey with a 3-3 score observed in the government’s test of one monopool of type 3 poliovirus vaccine is clearly an outlier. The other 14 monkeys in the intraspinal test had very low scores, and Lederle’s neurovirulence test did not produce a monkey with a 3-3 score. I conclude that the neurovirulence test on this type 3 monopool clearly did not exceed that of the reference virus – there is no scientifically valid justification for arguing otherwise.

If you don’t believe in outliers, there is another way to look at this issue: does a monkey with a 3-3 score in the neurovirulence test mean that the lot of vaccine is more likely to cause paralysis in humans? We cannot carry out such an experiment prospectively, but we can do the next best thing – compare the results of the monkey neurovirulence test with the rate of vaccine-associated poliomyelitis. In the entire history of the monkey neurovirulence test – from 1962-1999 – some monopools of vaccine periodically had one or two monkeys with a 3-3 neurovirulence score, and others did not. Nevertheless, the rate of vaccine-associated paralytic disease remained remarkably constant over this time: 5-10 cases per year. There were no spikes in the years when the “3-3” vaccines were in distribution. The conclusion is clear: no lot of vaccine is associated with an increase in the number of paralytic cases in any year.

Why do the Sabin vaccine strains cause paralytic disease in some recipients and contacts? Albert Sabin derived these vaccine strains by serially passing neurovirulent isolates in different cell types, empirically identifying viral mutants with a reduced capacity to cause disease. There are few mutations responsible for the reduced neurovirulence of the Sabin strains – 5 for type 1, and 2 each for the type 1 and type 2 strains. These mutations rapidly revert during multiplication of the vaccine viruses in the human gut, and that occurs in every recipient of the vaccine. Within several days, the recipient sheds viruses that no longer bear the mutations that Sabin so painstakingly selected. These excreted revertants, when tested in monkeys, are more neurovirulent than the vaccine that was fed to the recipient.

Given the high reversion rate of the poliovirus vaccine in the human intestine, it is hard to understand why the vaccine is so safe in practice. Put another way, why do some individuals contract poliomyelitis after exposure to the vaccine, while the vast majority to not? Their paralytic disease is caused by neurovirulent revertant viruses, but why these individuals are more susceptible than the general population is unknown. One hypothesis is that they have a sub-optimal, innate immune response to infection, which allows unchecked multiplication of the revertant viruses and eventual invasion of the brain and spinal cord.

The timing of the plaintiff’s paralysis in the New York case is highly revealing. He reported the first symptoms of paralysis 6 weeks after his daughter received the vaccine. There is a 12-15 day incubation period between the time when poliovirus is ingested and the first appearance of paralytic symptoms. Working backwards, it is likely that the plaintiff was infected by his daughter’s vaccine during the first week of June – nearly four weeks after administration of Orimune to the infant. By this time, all the type 3 viruses that the baby was excreting had reverted to greater neurovirulence. The results of the monkey neurovirulence tests on the vaccine that was fed, therefore, have no relevance to the virus that infected the plaintiff. No matter what scores had been obtained on the monpools by the FDA or by the manufacturer, the excreted virus would have all reverted to neurovirulence long before the plaintiff’s infection.

In my view, the scientific evidence overwhelmingly indicates that the neurovirulence of the vaccine in this case was acceptable. I believe that I explained the science clearly to the jury; nevertheless, they found the defendant released vaccine that violated the FDA’s monkey neurovirulence standards and that posed a greater risk than the risk that is inherent in all OPV. This case illustrates that complex scientific issues that we struggle with in the laboratory are most difficult to grasp by jurors. Indeed, one could argue that using a lay jury to decide scientific issues is an imperfect solution. Perhaps cases like this should be resolved by truly expert panels of scientists who are in a better position to evaluate the evidence presented.

Oral polio vaccine has an inherent risk that public health authorities deemed to be acceptable, given the extraordinary benefits of the vaccine. However, in a sense, the ~400 individuals who contracted vaccine-associated polio from 1962-1999 paid a price for the greater good of the population. For this reason alone they deserved compensation, which is what they now receive under the National Childhood Vaccine Injury Act.  Compensation for these individuals is given without the need to castigate life-saving vaccines likes OPV.