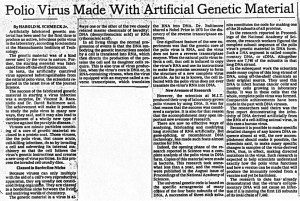 I have had many opportunities to speak with journalists of different kinds during the more than 30 years that I have studied viruses. I wrote previously about my negative experience with CNN. I’d like to relate a much more positive encounter with newspaper reporters.

As a postdoctoral fellow in David Baltimore’s laboratory I was fortunate to have found that a cloned DNA copy of the RNA genome of poliovirus is infectious in mammalian cells. It was the first such finding for an animal virus and made it possible to create and genetically modify viruses.

These findings attracted a good amount of press coverage. On November 15, 1981, the New York Times published an article by Harold Schmeck entitled “Polio Virus Made With Artificial Genetic Material” (click image above for a larger view). I was a bit taken aback by the headline: up to that point in my career I’d had few encounters with journalists. What did he mean by ‘artificial genetic material’? I’d placed the viral genome in a bacterial plasmid, which I didn’t view as artificial nucleic acid. The article began:

It’s true that poliovirus nucleic acid is never found in a bacterial plasmid in nature. But what did he mean by ‘off-the-shelf chemicals’? Then I realized: we had explained to Mr. Schmeck that poliovirus RNA was converted to a DNA copy using the enzyme reverse transcriptase. The enzyme was provided with the four nucleoside triphosphates – ATP, TTP, CTP, and GTP – which were used to produce the DNA copy. Those were the ‘off-the-shelf chemicals’: not exactly the kind of thing you might find in the local supermarket, but I got the analogy. In the end I liked the article; it was factually correct and presented in an engaging manner.

On the following Sunday, in ‘News of the Week in Review’, the Times included a short piece on our results in the ‘Ideas and Trends’ section entitled ‘Reinventing a Polio Virus’ (click to view). It began:

Off-the-shelf chemicals are seldom the stuff of which genetic material is made. But scientists at Massachusetts Institute of Technology used just that to manufacture the genetic core of a polio virus. Then, even the scientists were surprised. When tested on cell samples, the artificially contrived virus appeared indistinguishable from the real thing; both initiated polio infection.

I suppose the off-the-shelf analogy helped make it clearer to readers that we had done something different. In 1981 there was no Science Times section and readers did not have the amount of science journalism that we have today.

After Mr. Schmeck’s article was published, he told us that it was originally scheduled for the front page of the newspaper. But November 15, 1981 was the day the first space shuttle was launched, and as a result our story was pushed to the inner pages. Not bad, though, for my first encounter with journalists.

Later in 1981 I was interviewed for a BBC radio program about my work on poliovirus. I’ve located a recording of that interview and will post it here tomorrow.