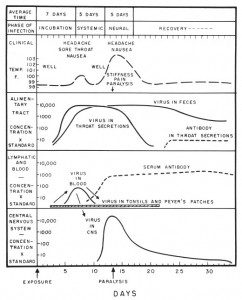 The clinical signs of an acute viral infection – characterized by rapid onset of disease with a short but sometimes severe course – are often obvious. These include coughing, sneezing, rashes and poxes, or headache. What takes place within the body while these symptoms develop?

Examination of the time course of an acute infection such as poliomyelitis reveals significant differences in the onset of clinical symptoms and appearance of virus or antiviral antibodies. The data in the figure (click for a larger view) come from studies of the disease in humans, which was common in the US until the early 1960s and therefore was extensively described in many medical texts. Within 2 days of exposure, virus levels begin to rise in feces and throat secretions, but no signs of disease are evident until day 7, when headache, sore throat, and nausea develop. The appearance of these non-specific symptoms (e.g. not unique to infection with any particular viral infection) correspond with peak levels of virus in the blood. Both subside by day 10. Antiviral antibodies begin to accumulate in the blood at the end of the viremic stage, around days 9-10.

Ninety-nine percent of all poliovirus infections end at this stage. In the remainder, the virus enters the central nervous system where it multiplies rapidly and reaches peak levels at day 13-14. At this time, headache and nausea return, accompanied by stiffness, pain, and in some cases, paralysis. During this central nervous system phase of the infection, levels of virus in throat secretions decline but remain high in the feces.

This typical pattern of acute infection has several practical consequences. Shedding of virus soon after exposure, in the pre-symptomatic period, facilitates the spread of infection. These individuals do not develop serious illness and remain in contact with others. By the time symptoms appear – either the mild symptoms or paralysis – virus in the blood is already declining. An antiviral compound given at this time would have no effect on the outcome of disease. Antibodies peak late in infection – too late to have a significant impact on the course of disease. This finding provided the early clues that lymphocytes, not antibodies, play a major role in clearing many acute viral infections.

If this hand-drawn schematic looks dated, it is because it was taken from a 1959 book entitled “Viral and Rickettsial Infections of Man”, edited by Rivers and Horsfall. It contains chapters written by the virology luminaries of the time, including George Hirst, Igor Tamm, A.D. Hershey, John Enders, Edwin Lennette, Albert Sabin, Jonas Salk, and David Bodian. Much of the information is dated, but some of it – including the course of poliomyelitis – established the basic principles of viral pathogenesis that will never be obsolete.