When influenza virus is introduced into the respiratory tract, by aerosol or by contact with saliva or other respiratory secretions from an infected individual, it attaches to and replicates in epithelial cells. The virus replicates in cells of both the upper and lower respiratory tract. Viral replication combined with the immune response to infection (which we’ll discuss in later posts) lead to destruction and loss of cells lining the respiratory tract. As infection subsides, the epithelium is regenerated, a process that can take up to a month. Cough and weakness may persist for up to 2 weeks after infection.

A recent paper compiled data from a number of studies in which human volunteers were given influenza virus, and the production of virus and flu-like symptoms were recorded. The results are summarized in this graph: 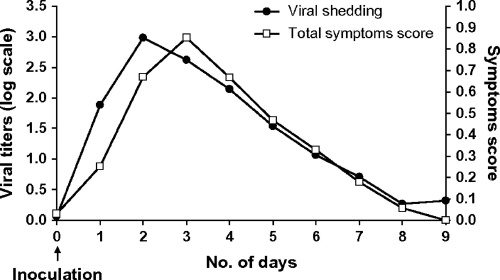 Volunteers were infected with influenza virus by intranasal instillation, and virus titers were determined in daily nasal washes. Symptoms monitored included nasal stuffiness, runny nose, sore throat, sneezing, hoarseness, ear pressure, earache, cough, breathing difficulty, chest discomfort, and fever. The results indicate that viral shedding precedes illness by one day, but the curves are otherwise very similar. Most infections are mild and complete in 5 days but some continued for a week. Interestingly, 1 in 3 volunteers did not develop clinical illness but nevertheless shed virus.

These experimental findings most likely do not completely duplicate what occurs in natural influenza infections. First, the study did not involve children or older individuals, in whom the disease course is likely to be different. Furthermore, the pattern of infection will vary depending on the strain of influenza and the immunological status of the host.

Influenza complications of the upper and lower respiratory tract are common. These include otitis media, sinusitis, bronchitis, and croup. Pneumonia is among the more severe complications of influenza infection, an event most frequently observed in children or adults. In primary viral pneumonia, the virus replicates in alveolar epithelial cells, leading to rupture of walls of alveoli and bronchioles. Influenza H5N1 viruses frequently cause primary viral pneumonia characterized by diffuse alveolar damage and interstitial fibrosis. Primary viral pneumonia occurs mostly in individuals at high risk for influenza complications (e.g. elderly patients) but a quarter of the cases occur in those not at risk, including pregnant women.

The reasons why influenza virus infections may lead to pneumonia are not understood. Several hypotheses have been proposed and disproved over the years, including one in which reduced numbers of lymphocytes allow increased susceptibility to superinfection.