My experiments to understand how ZnCl2 inhibits rhinovirus replication have been thwarted by the finding that concentrations of the salt higher than 0.1 mM are toxic for cultured HeLa cells. The cells can tolerate 0.1 mM but not 0.2 mM ZnCl2. Last week I asked whether I could identify a concentration between 0.1 and 0.2 mM that does not harm the cells but inhibits viral plaque formation >99%. Here are the results. 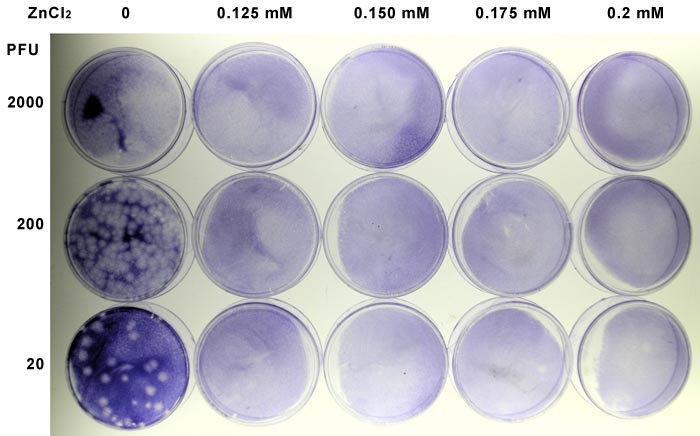 Unfortunately even 0.125 mM ZnCl2 is toxic to the cells – which is surprising since the cells can tolerate 0.1 mM. The goal of these experiments is to identify Zn-resistant rhinovirus mutants, and this cannot be done with cell monolayers that are not healthy.

I have one more idea for how to get around the ZnCl2 toxicity. To improve the formation of rhinovirus plaques, 25 mM MgCl2 is added to the agar overlay. It is possible that this high amount of magnesium, together with 0.2 mM ZnCl2 or higher, is toxic to cells. Therefore I will determine whether Zn toxicity is reduced if MgCl2 is omitted from the agar overlay. The rhinovirus plaques will be smaller but that is a reasonable trade-off for healthier monolayers.

If omitting MgCl2 doesn’t work, then I will have to select Zn resistant rhinovirus mutants in cells propagated in liquid cell culture medium. I’ll explain that approach next week.

So far in my experiments to understand inhibition of rhinovirus replication by ZnCl2 I’ve found that at a concentration of 0.1 mM, viral plaque formation is inhibited but not sufficiently to be able to select resistant mutants. Attempts to use higher concentrations of the metal have consistently failed.

When I initially I tried higher concentrations of ZnCl2 in the plaque assay (0.2, 0.3, 0.4 mM) the cell monolayers looked poor. I thought one reason for this apparent toxicity was that the HeLa cell monolayers were too sparse. Last week I repeated the experiment using plates of HeLa cells seeded with 2 or 2.25 million cells each the night before. I infected the cells with two different amounts of rhinovirus type 1a, added a semisolid overlay with or without ZnCl2, and incubated for four days. The results are shown below. 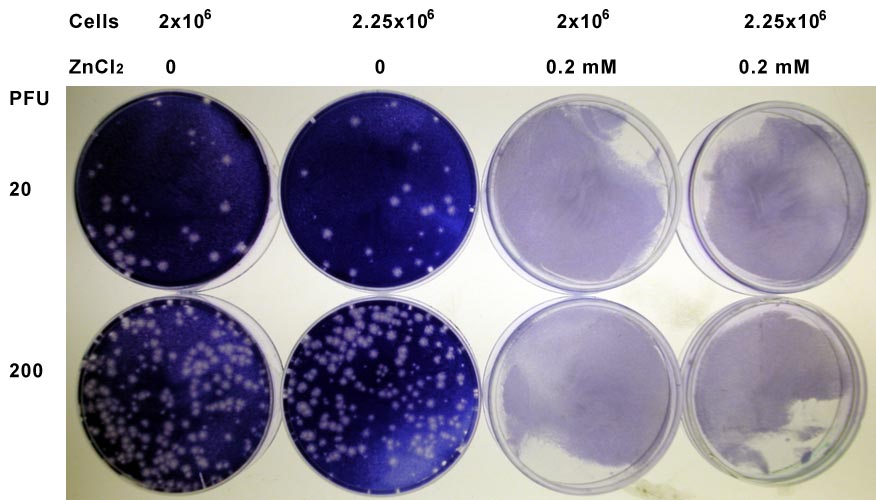 It’s clear that seeding the plates with 2 or 2.25 million HeLa cells made no difference: 0.2 mM ZnCl2 is still toxic to the monolayers. I find it surprising that the cells have no problem with 0.1 mM ZnCl2 but fare poorly at twice the concentration; but that is the observation and I’ll have to work around it.

Tomorrow’s experiment: try intermediate concentrations of ZnCl2 in the plaque assay, between 0.1 and 0.2 mM. It might be possible to identify a concentration that does not harm the cells but inhibits viral plaque formation >99%. 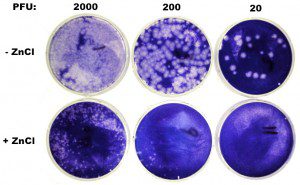 Recently I began experiments to understand how zinc inhibits rhinovirus replication, and I promised to document my findings on the pages of this blog. Here are the results of the second plaque assay.

In the last experiment I confirmed the finding that 0.1 mM ZnCl2 inhibits plaque formation by rhinovirus type 1A. Based on the results of that plaque assay, shown in the figure at left, I’ve decided that this concentration of zinc isn’t sufficient to completely inhibit viral replication. Although 0.1 mM ZnCl2 blocked plaque formation when 20 or 200 pfu were inoculated on cells, many plaques arose on plates inoculated with 2000 pfu. These cannot be viral mutants resistant to zinc – there are too many of them. If there are 2000 plaques on the untreated plate, and 200 on the plate with zinc, that would mean that resistance to zinc arises at a frequence of 200/2000 = 0.1 or one in ten viruses. I would expect a mutation rate for an RNA virus to be more in the range of 1/1000 – 1/10,000.

I decided to repeat the plaque assay with higher levels of zinc in the agar overlay – 0.2, 0.3, and 0.4 mM. The results of that experiment are shown below. 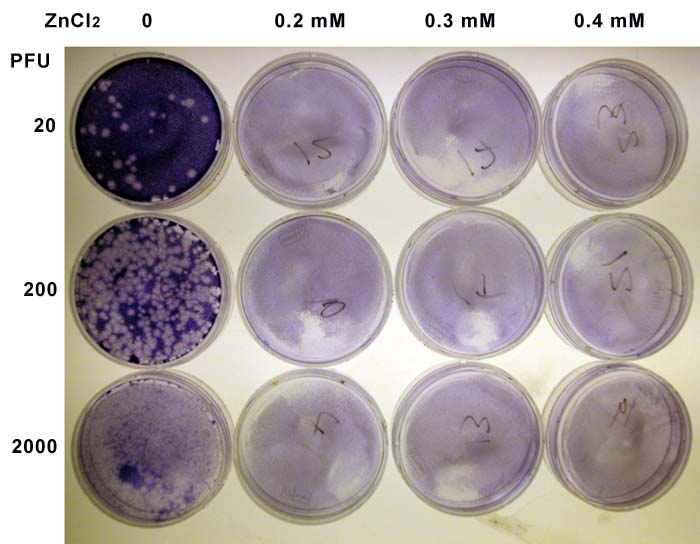 Unfortunately, the cells did not like the higher concentrations of ZnCl2! All the plates with zinc had very lightly staining monolayers – compare with the original experiment shown above – and no plaques were visible.

I was surprised that slight increases in the concentration of ZnCl2 would have such a dramatic effect on cell viability. The cells I used are HeLa cells, which are quite sturdy. Two other variables were changed in this experiment. I made a new stock of ZnCl2 – I took the 1 M stock I made for the first experiment and diluted it to 0.1 M. I doubt this made any difference. Second, the cell monolayers were less confluent than in the first experiment – about 70% of the surface of the cell culture dish was covered with cells. In the previous experiment, the monolayers were 100% confluent.

I repeated the experiment with HeLa cell monolayers that are 100% confluent. The results will be posted here in a few days. 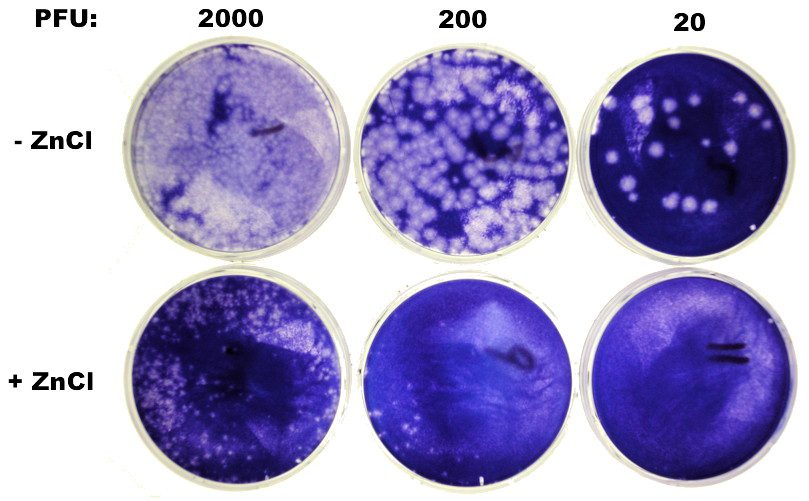 The title of this post should not come as a surprise to readers of virology blog – it was shown in 1974 that zinc could interfere with replication of rhinoviruses (see “Zinc and the common cold“). I am referring to the result of my first experiment to study the mechanism of zinc inhibition – something I promised I would document on these pages.

I am interested in understanding how zinc inhibits rhinovirus replication. Answering this question could lead to new ways to prevent common colds caused by these viruses. The first step was to reproduce the effect of zinc in my laboratory with my stocks of rhinovirus. I selected rhinovirus type 1a for my initial experiments because we’ve worked with this serotype in the past: we know the genome sequence and how the virus behaves in a mouse model. I started by doing a plaque assay with and without zinc in the medium. I prepared tenfold dilutions of virus and inoculated separate monolayers of HeLa cells with 2000, 200, and 20 plaque forming units. After allowing the virus to attach to cells for 45 minutes, I added an agar overlay to the cells with or without zinc chloride (ZnCl2). I selected 0.1 millimolar ZnCl2 because that is the concentration which had been reported to effectively inhibit plaque formation by rhinovirus type 1a. The plates were incubated for four days at 32Â°C and then stained. The results are shown in the photo. Plaque assays are typically done in duplicate but for simplicity only one plate of each dilution is shown.

What do you think is going on here, and what should I do next? If you’ve kept up with virology 101 you have all the tools to answer these questions. Please post your thoughts in the comments section.