By infecting organotypic brain slice cultures from embryonic mice, we have shown that Zika virus has always been neurotropic. The same culture system provides information on how Zika virus infection of the developing brain might lead to microcephaly.

END_OF_DOCUMENT_TOKEN_TO_BE_REPLACED 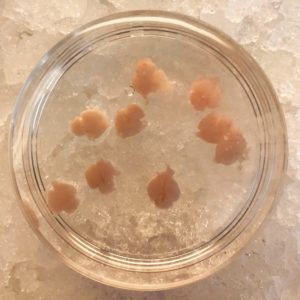 Sharon Isern and Scott Michael return to TWiV for a Zika virus update, including their work on viral evolution and spread, and whether pre-existing immunity to dengue virus enhances pathogenesis. 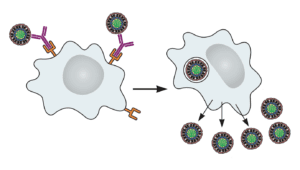 The short answer to the question posed in the title of this blog is: we don’t know.

Why would we even consider that a prior dengue virus infection would increase the severity of a Zika virus infection? The first time you are infected with dengue virus, you are likely to have a mild disease involving fever and joint pain, from which you recover and develop immunity to the virus. However, there are four serotypes dengue virus, andÂ infection with one serotype does not provide protection against infection with the other three. If you are later infected withÂ a different dengue virus serotype, you may even experience more severe dengue disease involving hemorrhagic fever and shock syndrome.

The exacerbation of dengue virus disease has been documented in people. Upon infection with a different serotype, antibodies are produced against the previousÂ dengue virus encountered.Â These antibodies bind the new dengue virus but cannot block infection.Â Dengue virus then enters and replicates in cells that it does not normally infect, such as macrophages. Entry occurs when Fc receptors on the cell surface bind antibodyÂ thatÂ is attachedÂ to virus particles (illustrated). The result is higher levels of virus replication and more severe disease. This phenomenon is called antibody-dependent enhancement, or ADE.

When Zika virus emerged in epidemic form, it was associated with microcephaly and Guillain-BarrÃ© syndrome, diseases that had not been previously known to be caused by infection with this virus. As Zika virus and dengue virus are closely related, because ADE was known to occur with dengue virus, and both viruses often co-circulated, it was proposed that antibodies to dengue virus might exacerbate Zika virus disease.

It has been clearly shown by several groups that antibodes to dengue virus can enhanceÂ Zika virusÂ infection of cells in culture. Specifically, adding dengue virus antibodies to Zika virus allows it to infect cells that bear receptors for antibodies – called Fc receptors. Without Fc receptors, the Zika virus plus dengue antibodies cannot infect these cells. ADE in cultured cells has been reported by a number of groups; the first was discussed here when it appeared on bioRxiv.

The important question is whether antibodies to dengue virus enhance Zika virus disease in animals, and there the results are mixed. In one experiment, mice were injected withÂ serum from people who had recovered from dengue virus infection, followed by challenge with Zika virus. These sera, which cause ADE of Zika virus in cultured cells, led to increased fever, viral loads, and death of mice.

These finding were not replicated in two independent studies conducted in rhesus macaques (paper one, paper two). In these experiments, the macaques were first infected with dengue virus, and shown to mount an antibody response to that virus. Over one year later the animals were infected with Zika virus (the long time interval was used because in humans dengue ADE is observed mainly with second infections 12 months or more after a primary infection). Both groups concluded that prior dengue virus immunity did not lead to more severe Zika virus disease.

Which animals are giving us the right answer, mice or monkeys? It should be noted that the mouse study utilized an immunodeficient strain lacking a key component of innate immunity. As the authors of paper one concluded, it’s probably not a good idea to use immune deficient mice to understand the pathogenesis of Zika virus infection of people.

When it comes to viral pathogenesis, we know that mice lie; but we also realize that monkeys exaggerate. Therefore we should be cautious in concluding from the studies on nonhuman primates that dengue virus antibodies do not enhance Zika virus pathogenesis.

The answer to the question of whether dengue antibodies cause Zika virus ADE will no doubt come from carefully designed epidemiological studies toÂ determine if Zika virus pathogenesis differs depending on whether the host has been previously infected with dengue virus. Such studies have not yet been done*.

You might wonder about the significance of dengue virus antibodies enhancing infection of cells in culture with Zika virus. An answer is provided by the authors of paper one:

In vitro ADE assays using laboratory cell lines are notoriously promiscuoius and demonstrate no correlation with disease risk. For example, DENV-immune sera will enhance even the homotypic serotype responsible for a past infection in the serum is diluted to sub-neutralizing concentrations.

The conundrum of whether ADE is a contributor to Zika virus pathogeneis is an example of putting the cart before the horse. For dengue virus, we obtained clear evidence of ADE in people before experiments were done in animals. For Zika virus, we don’t have the epidemiological evidence in humans, and therefore interpreting the animals results are problematic.

*Update 8/12/17: A study has been publishedÂ onÂ Zika viremia and cytokine levels in patients previously infected with dengue virus. The authors find no evidence of ADE in patients with acute Zika virus infection who had previously been exposed to dengue virus. However the study might not have been sufficiently powered to detect ADE.

You can find TWiV #432 at microbe.tv/twiv, or listen below.

You can find TWiV #430 at microbe.tv/twiv, or listen below.