Bacteria do not develop transmissible spongiform encephalopathies, but they have been found to produceÂ prions – proteins that can adopt alternative conformations withÂ different functions.

Prion diseases, aÂ frequent topicÂ on this blog, are caused by misfolding of a normal cellular prion protein (illustrated; image copyright ASM Press). Prion proteins are found in other organisms, where the alternative conformation confers a new, non-pathogenic function to the protein. At least 12 different prion proteins have been found in yeast, and they confer the ability to grow more efficiently under certain conditions. Now prions have been discovered in bacteria (link to article).

A search of 60,000 bacterial genomes for proteins with prion-forming domains revealed one in the transcription termination protein Rho from Clostridium botulinum (Cb-Rho). When produced in E. coli, the protein forms amyloid – protein aggregates in the form of fibrilsÂ – that areÂ characteristic of prions. A 68 amino acid stretch of Cb-Rho can functionallyÂ substitute for the prion-forming domain of a yeast prion-forming protein. This protein, called Sup35, can read stop codons in the prion state, and this phenotype was recapitulated in yeast by the Clostridium prion.

The Cb-Rho prion can convert between prion and non-prion conformations in E. coli. This property was demonstrated by placing a Rho-dependent terminator between a promoter and the lacZ gene, the product of which produces a blue color. In the prion state, Rho has decreased activity, leading toÂ blue cells. In the non-prion state, normal termination leads to pale blue colonies. A mixture of blue and pale blue colonies wasÂ observed, showing that Rho exists in the prion and non-prion states.

The finding of a prion in bacteria indicates that this form of protein-based heredity arose before eukaryotes emerged on Earth. Similar prion-like protein domains have also been found in other phyla of bacteria, suggesting the existence of an important source of epigenetic diversity that can allow bacterial growth underÂ diverse conditions. Exactly how bacterial prions confer new functions will be exciting to discover.

Last time we learned that eukaryotes probably didnâ€™t invent the nucleus. Now we find that prions likely emerged first in bacteria. Did eukaryotes invent anything? 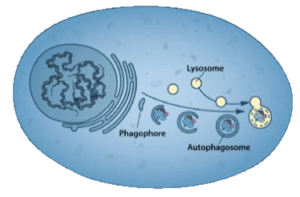 Yoshinori Ohsumi has been awarded the 2016 Nobel Prize for Physiology or Medicine for his work on autophagy, a process of eukaryotic cells for degrading and recycling cellular components. Because of his research, we now understand the importance of autophagy in health and human disease. It is another example of the serendipity of science and yes, it is relevant to virology!

The word autophagy was coined by Christian de Duve in 1963 to describe a process that he and others had previously described: when stressed, cells would sequester portions of the cytoplasm in double-membraned vesicles called autophagosomes. These would then fuse with lysosomes (which de Duve had discovered) and the contents were degraded (illustrated; image credit).

In subsequent years it was suggested that autophagy might have roles in human disease, but little progress was made on understanding how the process worked: how it was triggered, what proteins were involved, and its function in health and pathogenesis.

As a young Assistant Professor at Tokyo University in the early 1990s, Ohsumi found that autophagy occurred in the yeast Saccharomyces cerevisiae. He decided to produce yeast strains lacking the proteases that would be involved in digesting the contents of the autophagic vesicles, with the idea that these vesicles would accumulate under stress (under normal conditions the autophagosome exists for a short period of time, making its study difficult).

When Ohsumi stressed the yeasts lacking the vacuolar (equivalent of mammalianÂ lysosome) proteases, autophagosomes accumulated in the cytoplasm which were readily visible by light microscopy. He used this clear phenotype toÂ isolate yeast mutants that could no longer accumulate such vesicles, and identified 15 genes that are essential for induction of autophagy in eukaryotic cells.

LaterÂ Ohsumi elucidated the functions of these genes in autophagy induction, and found homologues in mammalian cells. His work stimulated great interest in autophagy, and it became a highly studied pathway. We now understand that autophagy is not only important for embryogenesis and cell differentiation, but plays roles in neurodegenerative diseases, cancer, and in defenses against bacterial and viral infections.

As might be expected, virus infection is a stress that triggers autophagy, which may impact the outcome of infections: it can have both antiviral functions, and it can also stimulate virus replication. As might be expected for a cellular process that degrades cytosolic contents, autophagy can lead to clearance of viruses. Consequently a number of viral genomes encode proteins that inhibit autophagy, including herpes simplex virus. Degradation of viral proteins by autophagy can also provide peptides for presentation to the cellular adaptive immune system, further enhancing clearance.

When autophagy was first described in the 1950s, no one knew its significance. Nevertheless, a number of scientists, including Ohsumi, continued to study autophagy because they were curious. The unexpected result was the elucidation of a pathway that has substantial roles in a variety of human diseases.

The lesson is clear: let scientists pursue their curiosity. Itâ€™s fine to target specific research problems, like curing cancer or diabetes, but donâ€™t ignore fundamental research on problems that donâ€™t seem to be directly relevant to human diseases. Iâ€™m concerned (as are many others) that the US science establishment is moving away from fundamental research (whose benefits may not be apparent for a long time) to translational research.

How do we explain the trend from fundamental to translational research? I donâ€™t have all the answers, but I think part of the problem is that the US Congress likes to spend taxpayer money on targeted problems, like Alzheimerâ€™s disease. But tell them that you want to study a process in cells that looks interesting, but you are not sure what it means, and you can see their reluctance to support this type of work.

Vincent, Rich, and Dickson review a meta-analysis on influenza vaccine, a killer virus in fungi that selects against RNAi, and the use of armed and targeted poxviruses for oncolytic virotherapy.

I joined Marc Pelletier on 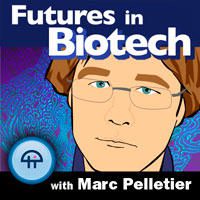 episode 60 of Futures in Biotech for a conversation with Malcolm Whiteway about one of the most powerful genetic model systems: Saccharomyces cerevisiae.