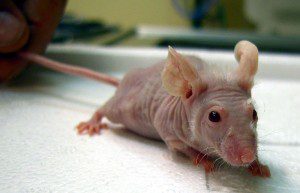 The retrovirus XMRV arose during passage of a human prostate tumor in nude mice.Â The genomes of these mice contain two different proviral DNAs related to XMRV, pre-XMRV-1 and pre-XMRV-2, that recombined to produce XMRV that has been isolated from humans.Â Two other prostate cancer cell lines also contain mouse gammaretroviruses that are not XMRV. These viruses may have entered the prostate tumor cells during xenograft passage in immunocompromised mice.

Polymerase chain reaction and nucleotide sequencing analysis revealed that these viruses are not XMRV. The virus in the EKVX cell line is a xenotropic MLV similar to a virus previously isolated from a human B-lymphoblastoid cell line. The virus from the LAPC4 and VCaP cell lines is the murine xenotropic retrovirus Bxv-1. A different sample of VCaP cells obtained from the ATCC were also positive for Bxv-1, as were LAPC4 cells obtained from a different laboratory. Replication-competent viruses were detected in all three cell lines.

How did these human prostate cancer cell lines become contaminated with murine gammaretroviruses? The authors believe this is a consequence ofÂ passage of the tumors through immunocompromised mice. In support of this hypothesis, the retrovirus Bxv-1 is present in nude mice, and passage of tumors in these mice can lead to infection with xenotropic MLVs. In contrast to the origin of XMRV, recombination was not needed to produce these viruses.

These findings led the authors to examine two other prostate cancer cell lines, present in their laboratory, DU145 and LNCaP, for the presence of gammaretroviruses. They found these cell lines to be contaminated with XMRV, likely obtained from 22RV1 cells in use in the laboratory. Fresh aliquots of the DU145 and LNCaP cells obtained from other sources were not contaminated. The authors conclude that if

CWR22Rv1 cells are routinely cultured in a typical biomedical research laboratory setting (e.g. using standard Class II biosafety cabinets and procedures for cell culture in which two different cell lines are never present under the hood at the same time), that XMRV can infect and contaminate other cell lines.