In the first episode for 2019, the TWiV team reviews the amazing virology stories of the past year.

The TWiVniks explain how the three-dimensional structure of the giant Cafeteria roenbergensis virus suggests a new mode of assembly, and the apparent elimination of dengue fever in an Australian city by release of mosquitoes harboringÂ Wolbachia.

Sharon Isern and Scott Michael return to TWiV for a Zika virus update, including their work on viral evolution and spread, and whether pre-existing immunity to dengue virus enhances pathogenesis. 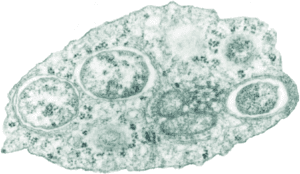 The obligate intracellular bacteriaÂ Wolbachia (pictured), which infects 40% of arthropods, can manipulate its host to ensure its maintenance in the population. An example is cytoplasmic incompatibility, which occurs when infected males mate with uninfected females, and causes embryonic lethality (mating with an infected female produces viable offspring). Two Wolbachia genes responsible forÂ this phenotype have been identified, and they are viral (link to paper).

A comparison of genome sequences of different Wolbachia strains that do or do not cause cytoplasmic incompatibility (CI) revealed two genes that were candidates for this phenotype. Both genes are transcribed in the testes ofÂ fruit flies, but at lower levels in older male flies which show decreased CI.

The two genes that together cause CI are called cytoplasmic incompatibility factor A and B (cifA, cifB). The cytological defects caused by these genes resemble those observed in Wolbachia-induced CI: most embryos do not divide more than two or three times.

Remarkably (or perhaps not!),Â cifA and cifB are not Wolbachia genes, but are viral.Â Wolbachia are infected with a bacteriophage called WO; nearly all sequenced Wolbachia genomes contain integrated WO DNA, and it is within this WO prophage that are found cifA and cifB. In other words, the ability of Wolbachia to control the reproduction of its arthropod host is regulated by two viral genes integrated in the bacterial genome.

Because CI caused by Wolbachia is a means of increasing their proportion in the female line (the bacteria are maternally inherited), cifA and cifB also enable spread of WO bacteriophage.

How cifA and cifB cause CI is unknown – most of the encoded proteins have no recognized protein domainsÂ with the exception of weak homology to proteases. Â Understanding this mechanism might alsoÂ contribute to controlling the spread of arboviruses: Wolbachia is known to inhibit replication of some mosquito borne viruses such as dengue virus and Zika virus.

The TWiVome reveal the firstÂ eukaryotic genes found in a bacteriophage ofÂ Wolbachia, and how DNA tumor virus oncogenes antagonize sensing of cytoplasmic DNA by the cell.

You can find TWiV #412 at microbe.tv/twiv, or listen below.