On episode #262 of the science show This Week in Virology,Â Vincent returns to the University of Wisconsin â€“ Madison to speak with Ann Palmenberg about her career in virology. 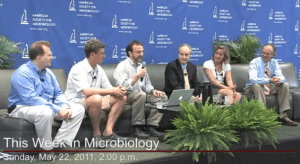 Vincent, Michael, and Stanley recorded episode #8 of the podcast This Week in Microbiology live at the 2011 ASM General Meeting in New Orleans, with guests Andreas BaÃ¼mler, Nicole Dubilier, and Paul Rainey. They spoke about how pathogens benefit from disease, symbioses between chemosynthetic bacteria and marine invertebrates, and repetitive sequences in bacteria. 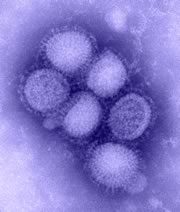 The World Health Organization has declared the end of the pandemic caused by H1N1 influenza virus. According to Director-General Margaret Chan,

The world is no longer in phase 6 of influenza pandemic alert. We are now moving into the post-pandemic period. The new H1N1 virus has largely run its course.

As we enter the post-pandemic period, this does not mean that the H1N1 virus has gone away. Based on experience with past pandemics, we expect the H1N1 virus to take on the behaviour of a seasonal influenza virus and continue to circulate for some years to come.

According to the Director-General, levels and patterns of H1N1 transmission are now different from those observed during the pandemic.Â Out-of-season outbreaks are no longer being reported, and their intensity is similar to that seen during seasonal epidemics.Â In addition, multiple influenza viruses are being isolated in many countries, a pattern typical of many recent seasonal epidemics.

I take particular interest in what the Director-General believes did not happen:

This time around, we have been aided by pure good luck. The virus did not mutate during the pandemic to a more lethal form. Widespread resistance to oseltamivir did not develop. The vaccine proved to be a good match with circulating viruses and showed an excellent safety profile.

I continue to wonder why the Director-General, and many others, feel that influenza virus must change to a more lethal form. Although the four previous influenza pandemics occurred in multiple waves of increasing lethality, there is no evidence that they are a consequence of viral mutation. For example, the only virus available from the 1918 pandemic was rescued from an Alaskan influenza victim who was buried in permafrost in November of that year, when higher mortality was already evident. This makes it impossible to correlate any genetic changes in the virus with increased virulence.Â Viruses are available from different stages of the pandemics of 1957 and 1968, which also occurred in waves of increasing lethality, but to my knowledge the virulence studies have not been done.

I believe that a major selective force for viral evolution is the need to maintain efficientÂ transmission among hosts. This may be achieved by any number of phenotypic changes, such as increases in stability and virion production. Changes in lethality might also lead to more effective transmission – for example, by inducing more severe coughing, the virus could be better transmitted among humans. But there is no genetic evidence that such changes have occurred during influenza virus pandemics.

How has the idea that influenza virus mutates to greater lethality permeated our popular culture? I don’t know the answer, but John Barry’s The Great Influenza is a prime suspect.

Vincent speaks with Adolfo Garcia-Sastre talk about the origin, pathogenesis, and prevention of the 2009 pandemic influenza H1N1 virus. 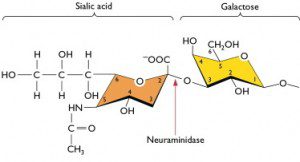 Last year a mutation in the HA gene of theÂ 2009 H1N1 influenza virus was identified in isolates from patients with severe disease. At the time I concluded that the emergence of this change was not a concern. Recently the Norwegian Institute of Public Health reported that the mutation, which causes a change from the amino acid aspartic acid to glycine at position 225 of the viral HA protein (D225G), has been identified in 11 of 61 cases (18%) of severe or fatal influenza, but not in any of 205 mild cases. Have these observations changed my view of the importance of this mutation?

The 2009 swine-origin H1N1 influenza virus is known to bind both alpha(2,3) and alpha(2,6) linked sialic acids. This is consistent with the ability of the virus to cause lower respiratory tract disease. The D225G change might be expected to increase affinity for alpha(2,3) linked sialic acids. However, it is not known if increased binding affinity correlates with higher infectivity and pathogenicity. It’s equally likely that high affinity binding might restrict the movement of the virus in lung tissues by causing retention of the virus on nonsusceptible cells.

One view of the D225G mutation is that it is spreading globally and causing more severe disease. However there is no evidence in support of this hypothesis. According to WHO, viruses with the D225G change have been found in 20 countries since April 2009, but there has been no temporal or geographic clustering. As of January, the HA change has been identified in 52 sequences out of more than 2700. Furthermore, the authors of the Norwegian study write, “Our observations are consistent with an epidemiological pattern where the D225G substitution is absent or infrequent in circulating viruses, with the mutation arising sporadically in single cases where it may have contributed to severity of infection”.

One explanation for the sporadic emergence of influenza viruses with the D225G change is that they are selected for in the lower respiratory tract where alpha(2,3) sialic acids are more abundant than in the upper tract. Such selection might be facilitated in individuals with compromised lung function (e.g. asthmatics, smokers) or suboptimal immune responses, in whom the virus more readily reaches the lung. One way to address this hypothesis would be to compare the HA at amino acid 225 of viral isolates obtained early in infection, from the upper tract, with isolates obtained from the lower tract late in disease. However such paired isolates have not yet been obtained. But whether the presence of viruses with D225G increases viral virulence is unknown. Many H1N1 isolates from cases of fatal or severe disease do not contain this amino acid change.

There is an alternative explanation for the isolation of at least some influenza viruses with the D225G change: it is selected by propagation in embryonated chicken eggs. This selection occurs because cells of the allantoic cavity of chicken eggs have only alpha(2,3) linked sialic acids. A change in receptor specificity does not occur when viruses are propagated in MDCK (canine kidney) cells, which possess sialic acids with both alpha(2,3) and alpha(2,6) linkages. Consistent with this hypothesis, WHO reports (pdf) that the D225G substitution in 14 virus isolates occurred after growth in the laboratory.

Studies on the binding of influenza viruses to glycan arrays have shown that attachment is influenced not only by the linkage to the next sugar, but the type of sialic acid as well as the rest of the carbohydrate chain. The distribution of all the possible sialic acid containing sugars in the respiratory tract is unknown, as is the specific molecules that can support productive viral infection. The view that HA preferentially binds to either alpha(2,3) or alpha(2,6) linked sialic acids is likely to be overly simplistic: another casualty of reductionism.