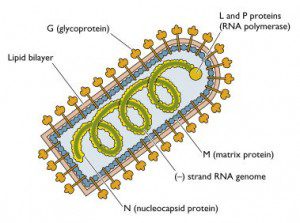 I came across an article in Saukvalley.com about VHSV, or viral hemorrhagic septicemia virus, which causes disease in fish. I have never worked on viruses of fish, but they’re fascinating, and economically very, very important. So let’s have a look at what this article is about.

VHSV causes a very serious disease of fresh and saltwater fish. Signs of VHSV infection include hemorrhaging, anemia, bulging eyes, and bloated abdomens, but not all fish display symptoms. The virus is lethal, causing outbreaks in which thousands of fish die.

VHSV is a member of the family Rhabdoviridae, which also includes the well known human pathogen rabies virus. However, VHSV is not known to infect humans. Members of the Rhabdovirus family have a enveloped capsid containing a single-stranded RNA genome of negative polarity. The diagram show a typical rhabdovirus, vesicular stomatitis virus.

VHSV was first isolated in the middle of the 20th century, when it became a disease of cultured rainbow trout. Since then the virus has been found to cause disease in many other fresh and saltwater fish. It first infected freshwater fish in the western hemisphere in 2005, when it was reported in Lake Ontario. The article in saukvalley.com cited above suggests that the virus might be headed for Lake Michigan, because it has been detected in a northern region of Lake Huron only 20 miles away. The article discusses the potential effect of the virus on the $4 billion per year sport fishing industry in the Great Lakes.

How does the virus spread? In the water, of course: infected fish excrete the virus in their urine. The virus probably made its way into the Great Lakes in the ballast of ships – the water stored in the bottom to stabilize the vessels.