This past February I was interviewed by the Australian Broadcasting Company on the topic of the Fouchier and Kawaoka experiments on avian influenza virus H5N1. The video, Building the Perfect Bug, has been released by Journeyman PicturesÂ and includes interviews with S.T. Lai, Laurie Garrett, Michael Osterholm, and Ron Fouchier (transcript available). It is far too alarmist for my taste, but both sides of the issue are represented.

The video includes sequences of me working in the cell culture laboratory. Note that I did wear a tie for my interview while Michael Osterholm did not.

Each year I teach basic virology to medical, dental, and nursing students here at Columbia University Medical Center. You can find all the lecture videos, slides, and readings here at virology blog: virology.ws/course. 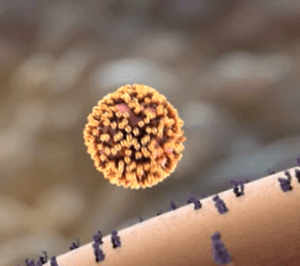 Earlier this year an influenza virus animation spread on YouTube just after the emergence of swine-origin influenza H1N1. I invited readers to criticise the animation which contained several errors.

A much better depiction of influenza virus animation has been created by XVIVO. It’s not only more beautifully rendered, but is scientifically much more accurate.

A slightly different version of the same video can be found at npr.org, but I prefer the video at XVIVO. The main problem is that NPR has added voice-over by Robert Krulwich. Â I find his narration annoying – he seems to be speaking down to the viewer, and he simplifies viral replication to the extent that what really occurs is obscured. For example, after the influenza virion is taken into the cell by endocytosis, Krulwich says

…and down it goes deeper and deeper and that welcoming structure disperses, and the virus capsule bursts and out comes the secret recipe for how to make more viruses and those little noodly things…

I don’t know what a virus ‘capsule’ is, but I assume he’s referring to the enveloped virion. And it doesn’t ‘burst’ – rather the viral and endosomal membranes fuse, allowing the viral RNAs to enter the cytoplasm. I understand that he’s trying to make virology accessible, but there are ways to do that without bending the truth. I think that Krulwich should take Influenza 101.

And ‘secret recipe’ and ‘noodly things’? Teaching does not work if you insult the students.

In the current episode of the Penn State University interview series called “Conversations from Penn State“, Peter Hudson, who is Willaman professor of biology and director of Penn Stateâ€™s Huck Institutes of the Life Sciences, discusses the dynamics of infectious diseases, their spread, and their transmission from animals to humans.

Thanks to Chris Condayan and Ray Ortega of the American Society for Microbiology for recording and editing TWiV live at the ASM General Meeting in Philadelphia, 19 May 2009. 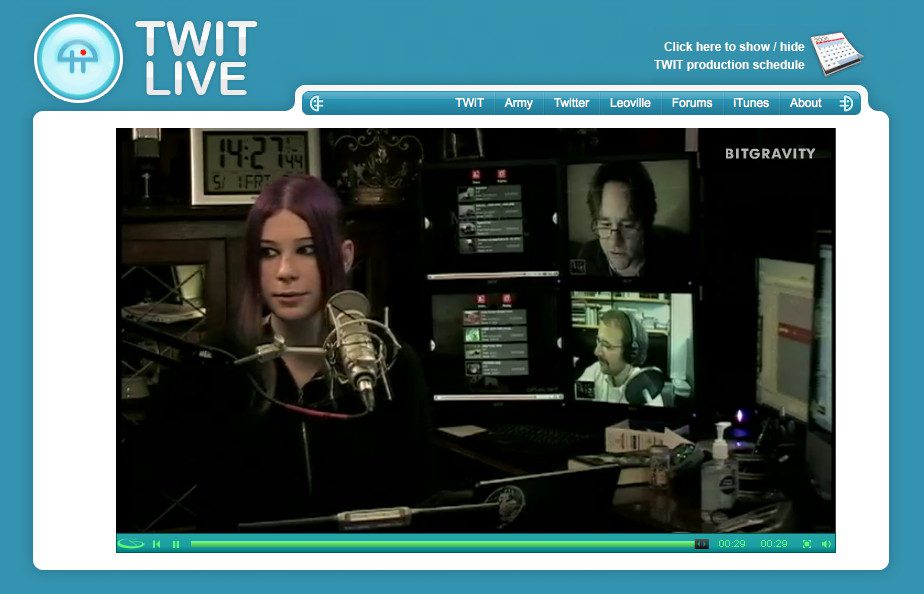 Marc Pelletier of Futures in Biotech and Vincent Racaniello of This Week in Virology discussed the current influenza situation in a live video broadcast hosted on the TWiT network this past Friday. We are very grateful to Leo LaPorte and the TWiT network for providing the video feed for the show. The audio was recorded and will be posted as an upcoming episode of Futures in Biotech. Many thanks to Colleen and Dane for their great help with the session. Above is a screen capture taken at the end of the show. Colleen is at the microphone and Marc and Vincent can be seen on two monitors of the skypesaurus. It was amazing to be part of a TWiT production, especially after having watched so many of them. The video and audio were excellent and I enjoyed seeing the technical underpinnings of TWiT live. This live video solution will, in my opinion, revolutionize science teaching.

A video of the entire session at On-Demand TWiT Video. Look for ‘Futures in Biotech 42’; you might have to scroll down the page a bit as other videos are added.