On episode #260 of the science show This Week in Virology,Â Vincent visits the University of Wisconsin, Madison and speaks with Tom, Tony, and David about their work on virus discovery at the AIDS Vaccine Research Laboratory. 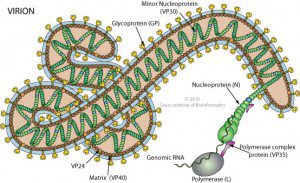 …the nameÂ Ebola virus is proposed for this new agent. Ebola is a smallÂ river in Zaire which flows westward, north of Yambuku, theÂ village of origin of the patient from whom the first isolate wasÂ obtained.

Retrospectively, the virus nomenclature in most published articles will then be correct. Likewise, press articles, which almost invariably refer to â€œEbola virus,â€ and usually with that term aim at referring to the virus that is currently officially named â€œZaire ebolavirus,â€ will be correct retrospectively and prospectively. As the traditional names are different from the species names, confusing species and virus names will be much more difficult, even in the absence of taxonomic education.

This discussion leads us to the important difference between a virus and a species. Â A virus species is defined as a polythetic class of viruses that constitutes a replicating lineage and occupies a particular ecological niche.Â According to the ICTV rules of nomenclature, virus species names are italicized with the first letter of the name capitalized (Zaire ebolavirus).Â Virus names (poliovirus) are written in lower case (except if a part of the virus name is a proper noun, e.g. Coxsackievirus) in non-italicized script.

The editors at TakePart changed my ‘ebolavirus’ to Ebola virus because that is the term they are familiar with. Using this name is not correct because Sudan virus, not Ebola virus,Â is responsible for the current outbreak in Uganda.

An outbreak of Ebola hemorrhagic fever that began in early July 2012 has involved at least 36 individuals and 16 deaths. So far the disease has been confined to a rural region west of Kampala, the capital of Uganda. The subject of Richard Prestonâ€™s scaryÂ The Hot Zone, Ebolavirus is newsworthy because it can be highly lethal and inspires scenarios of pandemics. An examination of the virus and the disease should temper our fear of this pathogen.

[read the rest of my article at TakePart]