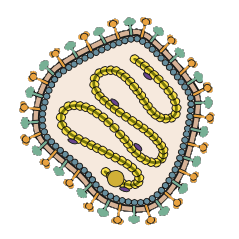 END_OF_DOCUMENT_TOKEN_TO_BE_REPLACED

The TWiVome deconstructs the evolutionary history of RNA viruses, and immune promotion of murine norovirus pathogenesis by replication in intestinal tuft cells.

At Cornell University in Ithaca, New York, Vincent speaks with Susan, Colin, and Gary about the work of their laboratories on parvoviruses, influenza viruses, and coronavirusesÂ that infect dogs,Â cats, horses and other mammals.

You can find TWiV #436 at microbe.tv/twiv, or listen below.

On episode #364 of the science show This Week in Virology,Â Vincent, Rich, and Kathy speak with Ralph Baric and Vineet Menachery about their research on the potential of SARS-like bat coronavirusesÂ Â to infect human cells and cause disease in mice.

On episode #215 of the science show This Week in Virology,Â Vincent, Alan, and Kathy review the finding that rabies virus infection alters but does not kill neurons, and provide an update on the novel coronavirus in the Middle East.

An important question about the retrovirus XMRV, which has been implicated in prostate cancer and chronic fatigue syndrome, is where the virus replicates in humans. Such information would provide clues about how infection might be transmitted. To date the virus has been detected in malignant prostate cells and in the peripheral blood mononuclear cells and plasma of patients with CFS. A new study reveals that XMRV is present in respiratory secretions.

Polymerase chain reaction was used to detect XMRV in 267 respiratory samples taken from German patients. One group comprised sputum and nasal swab specimens from 75 travelers from Asia who had respiratory tract infections. The second group consisted of 31 bronchoalveolar lavage samples from patients with chronic obstructive pulmonary disease, while samples from the third group were from 161 immunosuppressed patients with severe respiratory tract infections. The study included 62 healthy controls. It should be noted that none of the patients had been diagnosed with CFS.

XMRV sequences were detected in 3 of 75 samples (2.3%) in group 1, 1 of 31 samples (3.2%) in group 2, and 16/161 (9.9%) in group 3. Six of the XMRV-positive samples in the second group also contained rhinovirus, adenovirus, or pathogenic fungi. The higher rate of detection of XMRV and other microbes in immunosuppressed individuals is not unexpected. The control group contained 2 of 62 samples (3.2%) positive for XMRV.

The presence of XMRV in PBMCs and plasma suggests a blood-borne route of transmission of the virus: transfusions, health care associated needle sticks, and intravenous drug use. Does finding XMRV in the respiratory tract prove that the virus can be transmitted by the respiratory route? No, not until we have other information, including the level of virus in respiratory secretions, and the infectivity of XMRV. In this context it is interesting to note that it was not possible to isolate infectious XMRV from the respiratory tract of the German patients.

Reviewing the transmission of another human retrovirus, HIV-1, is instructive in understanding the pathogenesis of XMRV infection. The main modes of transmission of HIV-1 are sexual, parenteral, and from mother to infant. These routes of transmission are consistent with levels of infectious virus in body fluids (shown in this table). Viral RNA can be detected at several levels of the respiratory tract, but respiratory secretions rarely transmit HIV.