On episode #382 of the science show This Week in Virology,Â Nels Elde and Ed Chuong join the TWiV team to talk about their observationÂ that regulation of the human interferon response depends on regulatory sequences that were co-opted millions of years ago from endogenous retroviruses.

You can find TWiV #382 at microbe.tv/twiv, or listen below. 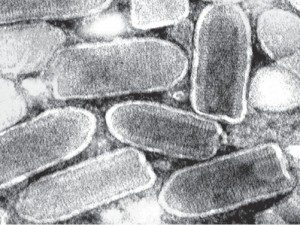 Many years ago a claim was made that cells infected with respiratory syncytial virus contained infectious DNA copies of the viral genome. When this paper was published,Â retroviral reverse transcriptase had been discovered, which explained howÂ DNA copies of retroviral RNA genomes were made in infected cells. Although the respiratory syncytial viral genome is RNA, it does not encode a reverse transcriptase, and how a DNA copy of this genome could be made in infected cells was unknown. The observation was initially met with great fanfare, and was suggested to account for why some RNA virus infections persist, and even to explain autoimmune diseases. However the findings were never duplicated, and the authors fell into scientific obscurity. Now it appears that they might not have been entirely wrong.

It is now quite clear that DNA copies of viral RNA are made in infected cells. A DNA copy of lymphocytic choriomeningitis virus (LCMV) RNA has been detected in mouse cells, and this DNA can beÂ integrated into cellular DNA. LCMV DNA was only detected in cells that produce a retrovirus, implicating reverse transcriptase in this process. DNAs of various RNA viruses, including bornaviruses and filoviruses, have been found integrated into the genome of many animals. An explanation for the genesis of these DNA copies is provided by studies of cells infected with vesicular stomatitis virus.

Vesicular stomatitis virus (pictured) is an enveloped virus with a genome of (-) strand RNA. In infected cells the (-) strand RNA is copied by the viral RNA polymerase to form 5 mRNAs which encode the viral proteins. Infection of various human cell lines resulted in the production of DNA complementary to VSV RNA. The DNAs are single stranded and appear to be produced from the viral mRNAs, not the viral genome.

To determine if LINE-1 could make VSV in infected cells, the authors took advantage of their observation that not all human cells produce VSV DNA after infection. Introduction ofÂ LINE-1 DNA into one of these cell linesÂ enabled it toÂ produce DNA copies of VSV mRNAs. This result shows that LINE-1 can make VSV DNA in infected cells. Whether LINE-1 actually accomplishes this process in unmodified, VSV infected cells remains to be proven.

It seems likely that in cells infected with RNA viruses, reverse transcriptase encoded by LINE-1 could produce DNA copies of viral RNAs. AfterÂ entering the nucleus these viral DNAs could become integrated into cellular DNA. If a germline cell were infected, the integrated viral DNA would be passed on to subsequent generations, explaining the presence of DNA copies of various RNA viruses in animal genomes.

A key question is whether the production of DNA copies of viral RNAs is an accident, or benefits the virus or host. There is yet no answer to this question. The authors suggest that DNA copies of viral RNA might contribute to innate immune sensing of viral infection. VSV replication is not altered by the presence or absence of viral DNA, but there could be a role for viral DNA during infection of a host animal.