On episode #282 of the science show This Week in Virology, the TWiV team reviewsÂ a meta-analysis of clinical trial reports on using Tamiflu for influenza, and suggestions on how to rescueÂ US biomedical research from its systemic flaws.

Neuraminidase is one of three different viral proteins embedded in the lipid membrane of influenza virus (NA is blue in the illustration at left). This enzyme has a clear and proven role in virus release from cells. NA is also believed to be important during virus entry, by degrading the mucus barrier of the respiratory tract and allowing virus to reach cells. This role is supported by the finding that treatment of mucus-covered human airway epithelial cells with the NA inhibitor Tamiflu substantially suppresses the initiation of infection. Â Further evidence comes from the recent finding that influenza virus binds to sialic acids in mucus and that NA cleaves these sugars to allow infection.

The mucus layer of the respiratory tract has a defensive role because it contains soluble glycoproteins that are rich in sialic acids, which are cell receptors for some viruses. When influenza virions enter the respiratory tract, they are thought to be trapped in mucus where they bind sialic acids, preventing infection of the underlying cells.Â The role of NA in penetration of the mucus layer was studied in frozen sections of human tracheal and bronchial tissues, in which the mucus layer is preserved. Influenza A virions bind to this mucus layer; the interaction is blocked when the tissues are first treated with a bacterial neuramindase, which removes sialic acids from glycoproteins. These observations indicate that the mucus layer of human airway epithelial cells contain sialic acid-containing decoys that bind influenza A viruses.

Human salivary mucins, which approximate the mucus of the human respiratory tract, can protect cultured cells from influenza virus infection. The protective effect can be achieved by simply adding the mucins to cells. The inhibitory effect is dependent on the sialic acid content of the mucins: fewer cells are infected when higher concentrations are used. In contrast, porcine salivary mucins do not substantially reduce influenza virus infection. The type of sialic acids and the virus strain also determine the extent of protection.

These studies establish a clear role for the influenza viral NA in bypassing the defenses of the mucosal barrier. An important message is that not all strains of influenza virus are equally inhibited by mucus; presumably this property is one of many that determines viral virulence. The balance between how tightly the viral HA binds to sialic acids, and how well the NA cleaves them, is probably one predictor of how well we our protected by our mucus. 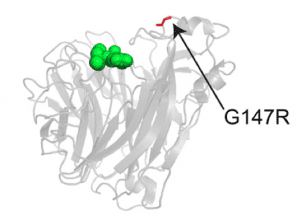 The influenza virus particle is made up of the viral RNA genome wrapped in a lipid membrane (illustrated). The membrane, or envelope, contains three different kinds of viral proteins. The hemagglutinin molecule (HA, blue) attaches to cell receptors and initiates the process of virus entry into cells. I have written about the HA and its function during infection (articleÂ oneÂ andÂ two) but not about the neuraminidase (NA, red) or M2 (purple) proteins. Letâ€™s first tackle NA.

An important function of the NA protein is to remove sialic acid from glycoproteins. Sialic acid is present on many cell surface proteins as well as on the viral glycoproteins; it is the cell receptor to which influenza virus attaches via the HA protein. The sialic acids on the HA and NA are removed as the proteins move to the cell surface through the secretory pathway. Newly released virus particles can still potentially aggregate by binding of an HA to sialic acid present on the cell surface. Years ago Peter Palese showed that influenza virus forms aggregates at the cell surface when the viral neuraminidase is inactivated. The NA is therefore an enzyme that is essential for release of progeny virus particles from the surface of an infected cell.

The essential nature of the NA for virus productionÂ has been exploited to develop new drugs designed to inhibit viral release. Both Tamiflu (Oseltamivir) and Relenza (Zanamivir) are structural mimics of sialic acid that bind tightly in the active site of the NA enzyme. When bound to drug, the NA cannot remove sialic acids from the cell surface, and consequently newly synthesized virus remains immobilized. The result is an inhibition of virus infection because virions cannot spread from one cell to another.

This article is part ofÂ Influenza 101, a series of posts about influenza virus biology and pathogenesis.

On episode #223 of the science show This Week in Virology,Â Vincent, Alan, and Kathy discuss new influenza virus NA inhibitors, detection of EEEV antibody and RNA in snakes, and replication of the coronavirus EMC in human airway epithelial cells.