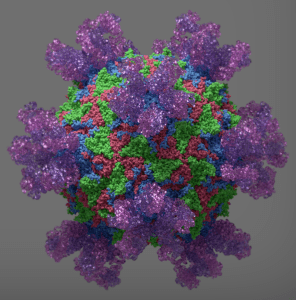 For the first time since April of 1955, recipients of poliovirus vaccineÂ willÂ no longer receiveÂ all three serotypes. This past Sunday the World Health Organization orchestrated a synchronized switch from trivalent to bivalent oral poliovirus vaccine (OPV) in 150 countries.

The reason for the switch is clear: type 2 poliovirus was declared eradicated last year, and the only remaining cases are cause by vaccine-derived type 2 polioviruses. AfterÂ oral administration of poliovirus vaccine, the virus replicates in the intestine, conferring immunity to subsequent infection. In all recipients of the vaccine the viruses lose the mutations that make them safe for humans. Consequently a small number of recipients, and their contacts, contract poliomyelitis from the vaccine.

To prevent further cases of poliomyelitis caused by circulating vaccine-derived polioviruses, WHO planned a synchronized, global switch from trivalent OPV to bivalent OPV on 17Â April 2016. By July of 2016 all remaining stocks of the Sabin type 2 poliovirus strains, which are used to produce OPV, will also be destroyed.

My concern with this strategy is that type 2 vaccine-derived polioviruses continue to circulate. Whether they will continue to do so long enough to cause an outbreak of paralytic disease in the cohort of new infants that do not receive type 2 vaccine is a mattern of conjecture. In case there is an outbreak, monovalent type 2 oral poliovirus vaccine is being stockpiled by WHO. Of course, re-introductionÂ of this vaccine will be accompanied by more circulating vaccine-derived poliovirus in the environment, and vaccine-associated disease, the very event WHO is trying to end with the trivalent to bivalent switch.

Type 3 poliovirus has not been isolated since 2012. Only type 1 poliovirus still causes outbreaks in two countries: Pakistan and Afghanistan. The inability to vaccinateÂ in those countries, due to conflict, is delaying eradication. The recent killing of seven police officers who were protecting polio vaccinators by the Pakistani Taliban is an example of this difficulty.

DevelopingÂ a great vaccine is not the only requirement for preventing infectious disease: you also have to be able toÂ deploy it.

An outbreak of ten cases of poliomyelitis caused by circulating vaccine-derivied poliovirus type 2 (cVDPV2) is ongoing in Pakistan, centered in the Kila Abdulla/Pishin area of Baluchistan. The same virus strain has spread to the neighboring Kandahar province in Afghanistan, where two paralytic cases have been reported. Vaccine-derived poliomyelitis is a well-known consequence of immunization with the Sabin poliovirus vaccine.

There are three serotypes of poliovirus, each of which causes poliomyelitis. The three vaccine strains developed by Albert Sabin (OPV, oral poliovirus vaccine) contain mutations which prevent them from causing paralytic disease. When the vaccine is taken orally, the viruses replicate in the intestine, and immunity to infection develops. While replicating in the intestinal tract, the vaccine viruses undergo genetic changes. As a consequence, the OPV recipients excrete neurovirulent polioviruses. These so-called vaccine-derived polioviruses (VDPV) can cause poliomyelitis in the recipient of the vaccine or in a contact. During the years that the Sabin poliovirus vaccines were used in the US, cases of poliomyelitis caused by VDPV occurred at a rate of about 1 per 1.4 million vaccine doses, or 7-8 per year. Once the disease was eradicated from the US in 1979, the only cases of polio were caused by VDPVs. For this reason the US switched to the Salk (inactivated) poliovirus vaccine in 2000.

Because VDPVs are excreted in the feces, they can spread in communities. These circulating VDPVs, or cVDPVs, can cause outbreaks of poliomyelitis in under-immunized populations. Examples include outbreaks of poliomyelitis in an Amish communityÂ and in Nigeria in 2009 caused by cVDPV2. Nigeria employed trivalent OPV before 2003, the year that this country began a boycott of polio immunization. Because type 2 poliovirus had been eradicated from the globe in 1999, when immunization in Nigeria resumed in 2004, monovalent types 1 and 3 vaccine were used. The source of the VDPV type 2 in Nigeria was the trivalent vaccine used before 2003.

For many years the vaccine used by WHO in the global eradication effort was a trivalent preparation comprising all three serotypes. When type 2 poliovirus was eliminated, many countries began immunizing only against types 1 and 3 poliovirus. As a consequence of this immunization strategy, population immunity to type 2 poliovirus declined. This has likely lead to the emergence of cVDPV2 in Pakistan, together with poor routine immunization coverage.

The resurrection of poliovirus type 2 highlights the difficulties in eradicating a pathogen using a vaccine that can readily mutate to cause the disease that it is designed to prevent. As wild type polioviruses are eliminated, the only remaining polio will be caused by the vaccine. If immunization is then stopped, as planned by WHO, there will likely be outbreaks of polio caused by cVDPV of all three serotypes. The solution to this conundrum is to switch to the inactivated vaccine until cVDPVs disappear from the planet.

Exacerbating the polio situation in Pakistan was the murder in the past week of nine immunization workers in several provinces. The Taliban, which carried out the executions, accused them of being spies. This accusation originates from the CIA operation in 2011 in which a Pakistani doctor ran an immunization program in Abbottabad in an attempt to obtain DNA samples from the Bin Laden family. As a result of this violence, immunization campaigns in Balochistan have been suspended. Coupled with the previous refusal of many parents to have their children immunized, this action makes it likely that poliovirus will spread more extensively in the country, making eradication even more difficult.