Memories are formed through the recurrent activities of extensive networks of neural circuits, which consist of neuronal cells that transmit signals to each other at sites called synapses. Synaptic strength can change in intensity over time, a phenomenon known as “synaptic plasticity,” which may involve changes in synapse size, development of new synapses, or removal of existing ones. Synaptic plasticity is thought to be crucial for learning and memory.

At this point you may wonder what this topic has to do with virology! It turns out that one of the key regulators of synaptic plasticity is a gene coding for Activity-regulated cytoskeleton-associated protein (Arc). Arc is a member of a family of mammalian genes thought to have originated from an ancient retrotransposon family that also includes the Gag proteins of HIV and other retroviruses. Retrotransposons are mobile genetic elements that can relocate from one genomic site to another by converting their DNA into RNA and back into a new DNA copy that is then re-inserted at a different place in the host genome. Gag protein, which is essential and sufficient for the formation of viral capsids, consists of three domains: 1) the matrix protein, which mediates virus assembly and steers newly formed virions to the cell surface; 2) the nucleocapsid protein, which binds viral RNA for incorporation into the capsid; and 3) the capsid protein, which forms the inner shell of the virion enclosing the RNA. The amino acid sequences and structures of both the mammalian and Drosophila (i.e., fruit fly) Arc proteins are very similar to those of the capsid domain of Gag protein.

Following his lifelong interest in Arc, Jason Shepherd, a neurobiologist at the University of Utah, accidentally stumbled into the world of virology when he carried out a series of experiments to determine whether Arc’s sequence similarity to Gag is reflected in its function. Shepherd and colleagues purified Arc protein produced in bacterial cells and visualized it by electron microscopy. The resulting images revealed double-shelled soccer ball-like structures with a 32 nanometer diameter that resembled HIV particles, which upon further analysis were not artifacts or contaminants, but were in fact, virus-like capsids.

Additional experiments by the Shepherd group showed that not only does Arc protein spontaneously assemble into capsids inside neuronal cells, but the capsids also bind and encapsulate Arc mRNA, are released in extracellular vesicles that form when the cell membrane extends into an outward bubble and pinches off from the cell, and traffic that RNA to the next neuronal cell in a putative mechanism of intercellular communication. The authors observed a higher number of completely formed capsids when there was also RNA present, regardless of whether the RNA encoded Arc protein. This suggested that the presence of RNA enhances the likelihood of capsid assembly, in agreement with what is observed with HIV Gag. They also showed that the ability of target neuronal cells to take in Arc capsids is likely mediated by endocytosis, a mechanism in which cells absorb and engulf external material. Following entry of capsids into neurons, there was an increase in Arc protein levels in the branched extensions of neurons (i.e., the “dendrites”), which did not occur in the presence of a drug that inhibits protein synthesis, thus suggesting that the Arc mRNA contained in the capsids was actually translated inside these dendrites. Work done by a different group showed that each of these functions was also manifested by the corresponding Drosophila gene, even though this gene is thought to have evolved independently of the mammalian Arc gene.

Shepherd is primarily interested in studying the persistence of memory and a process called “memory consolidation,” in which short-term recollections are converted into stable, long-term images. In his research, he discovered that mice that don’t express Arc exhibit some short-term learning potential, but seem to have impaired long-term memory, presumably because they can’t store and consolidate memory. Shepherd has also noted that rats exhibit increased expression of Arc following a learning activity. Based on these observations, Shepherd hypothesizes that because consolidation and storage of memory depend on renewed protein synthesis, Arc may mediate a molecular mechanism that converts short-term memory into long-term memory, possibly by shuttling specific mRNAs between neuronal cells.

In an opinion article published last year, Shepherd and colleagues speculated on various aspects of the Arc “life cycle” based on known features of Gag protein functions. They hypothesized that learning activities promote transcription of the Arc gene, followed by transport of the resulting mRNA molecules to active dendrites, where they are translated into Arc proteins that assemble into capsids and capture/encapsidate surrounding mRNA. The formation of capsids and their interactions with the cell membrane to enable exit from the cell may be regulated by modifications like phosphorylation and/or palmitoylation. Phosphorylation involves the attachment of phosphoryl groups to certain amino acids in a protein, and this modification may regulate capsid assembly. There is evidence suggesting that mice carrying a mutation that blocks phosphorylation of Arc capsids have impaired synaptic plasticity and memory. Palmitoylation involves the attachment of fatty acids – which may induce Arc to interact with the plasma membrane, allowing capsids to exit the cell inside extracellular vesicles. An extracellular vesicle carrying a capsid then likely travels to a nearby neuron, where it attaches to specific receptors and enters the cell via endocytosis. The capsids are subsequently dismantled inside the cytoplasm and the released mRNA is translated into protein. Shepherd and colleagues are currently in the process of determining whether these hypotheses are correct and what happens after translation of the delivered mRNA.

Because viruses can serve as vectors for delivering vaccines, therapeutic drugs, and healthy copies of defective genes to specific target cells, Arc may just come in handy in these applications. Shepherd argues that Arc is likely not immunogenic because it is also expressed in peripheral dendritic cells, which are an important element of the immune system. If that is true, Arc capsids could potentially deliver their cargo to their target cells without being detected by the immune system, making them suitable as delivery vectors.

The human genome encodes at least 100 retrovirus-derived gag-like genes, few of which have been studied. It is possible that at least some of these genes encode additional proteins that can form virus-like particles. In fact, a recent publication shows that another retrotransposon-derived protein called PEG10 with sequence similarity to Gag protein also binds and encapsidates mRNA to transport it out of cells in extracellular vesicles, and it could potentially be used to selectively deliver specific mRNAs for therapeutic purposes. There are also other mammalian genes of retroviral origin whose functions are just beginning to be defined. For example, a recent preprint suggests that a non-coding RNA of retroviral origin regulates the expression of the myelin gene, which encodes a protein critical for central nervous system function. The endogenous retroviral envelope gene Syncytin-1 also likely evolved to mediate the cell-cell fusion needed for the development of the human placenta. It will be interesting to follow new developments in this field as more data emerge.

[The ability of Arc to spontaneously form capsid-like particles was previously discussed on TWiV 477 and TWiN 4]. 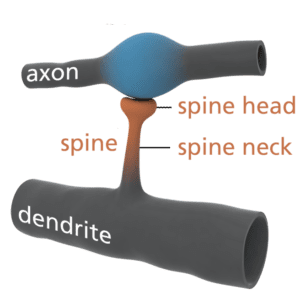