The Autonomous CollecTWiVe reveal two effective treatments for Ebolavirus infection, how a virus in a fungus confers heat tolerance to a plant, and dampened inflammation as a mechanism for bat tolerance to viral infection.

What do you call a small bacterium that acts like a virus, infecting and lysing eukaryotic cells? Chromulinavvorax destructans, of course!

As part of a study to identify pathogens that infect protist zooplankton, particles smaller than 0.8 microns were obtained from freshwater habitats in southwestern British Columbia, and used to infect cultures of protists.

END_OF_DOCUMENT_TOKEN_TO_BE_REPLACED 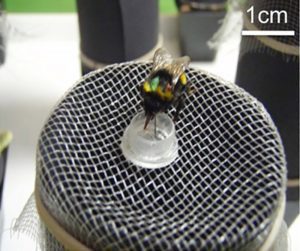 Volatile organic compounds that are emitted by plants – which play important roles in attracting insects – can be altered by virus infection. Infection by cucumber mosaic virus (CMV) increasesÂ theÂ emissions that attract aphids, but the virus-altered plant juices are not so tasty, so the insect quickly leaves to spread virus to other plants (listen to TWiV #70 for a full discussion of this finding). Plant pollinators can also respond to plant virus-induced volatile compounds (paper link)

Cucumber mosaic virus is a (+) strand RNA virus that is a pathogen of tomato plants. The virus is spread by aphids, and bumblebees increase fruit yield by buzz-pollinationÂ (tomato plants are self-pollinating but bumblebees cause increased seed production).

To study the attraction of bumblebees to tomato plants, the authors encased single tomato plants in a tower topped with a screen and a small cup of 30% sucrose (shown in photo: credit). This arrangement allowed volatile compounds to waft through the screen aboveÂ the plant.

Bumblebees clearly preferred to visit theÂ CMV-infected over theÂ uninfected plants. They also shunned plants infected with a mutant of CMV that cannot antagonize the RNA interference system of the plant – a major defense against viruses. The results suggest that CMV somehow alters plant produced volatile compounds to attract bumblebee pollinators, and that production of these compounds is regulated by microRNAs.

These findings – that CMV infected plants attract bees via the production of volatiles under the control of microRNAs – were confirmed using Arabidopsis, a model plant which can be genetically manipulated.

Chemical analysis of the volatiles produced by infected and uninfected tomato plants revealed that virus infection reduced the levels of two terpenoids, 2-carene and beta-phellandrene. These compounds are known to repel bumblebees, leading to the suggestion that their reduction may explain why bees preferÂ infected plants.

Is attraction of bumblebees byÂ viral infection random, or does it have a purpose? CMV infection of tomato plants decreases seed production, an effect that is reversed when bumblebees are attracted to the plants and pollinate them.

The results show that CMV infection of tomato plants causes the emission of volatile compounds that attract pollinating bumblebees, which negate the inhibition of seed production by infection.

Bumblebees do not transmit CMV, so how did this non-fatal attraction come about? One can imagine that at one time CMV infection of plants did not attract bumblebees, and that infection severely depressed plant production. Then a random viral mutant arose that could induceÂ the proper volatiles to attract bumblebees. This change provided a selective advantage because plant seed production was restored by bumblebee pollination. This is called a â€˜payback’ hypothesis: the virus has a place to replicate, and the plant lives on due to virus-induced volatile compounds.

I have a bit of trouble with this payback idea, because at the base of it are human-like intentions. Why do we assume that what drives evolution are forces that make sense to us? The plant-centric view is that it was not a CMV mutant, but a plant mutant that arose, which could make the proper bumblebee attractants upon CMV infection. The selective force to maintain such a plant is very clear and involves no anthropocentric â€˜paybackâ€™.

Whatever the origin of this non-fatal attraction, it merits further study, not only for developing better pollination methods, but for understanding the viral-host symbiosis. 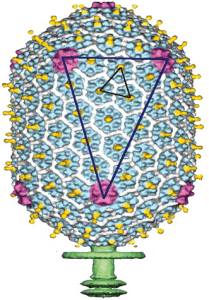 The mucosal membranes that line our respiratory, alimentary, and urogenital tracts and the outer surface of the eyes are portals of entry for microbes. The cells at these surfaces have functions that require that they are exposed to the environment – for example, gaseous exchange in the lung between inspired air and the blood. Mucus, pH extremes, enzymes, and immune cells are some of the antimicrobial defenses that are present at various mucosal surfaces. It now appears that bacteriophages – viruses that infect bacteria – might also be part of the mucosal antimicrobial defense system.

A sampling of the ratio of bacteriophages to bacteria in a variety of mucosal surfaces (sea anemone, hard and soft coral, polychaete, teleost, human gum, and mouse intestine) revealed higher ratios when compared to non-mucosal samples (e.g. neighboring sea water or saliva). A model bacteriophage ofÂ E. coli, T4, was used to show that phageÂ specifically attach to mucus: adherence to cultured cells was reduced when mucus was not produced or removed by chemical treatment.

The principal macromolecules in mucus are mucin glycoproteins, which consist of a polypeptide chain linked to hundreds of variable, branched sugar molecules. Mucins are continuously produced at mucosal surfaces which gives rise to a thick protective layer. PhageÂ T4 was found to attach specifically to mucins and not other components of mucus such as protein or DNA. The attachment of phage T4 to mucus-producing cultured cells reduced the number of bacteria that could attach to and kill the cells. This antimicrobial effect was substantially reduced when a strain of phage T4 was used that cannot lyse its bacterial host. Therefore phages bound in mucus protect cells by infecting and lysing bacterial invaders.

Phage T4 attaches to mucins through immunoglobulin-like (Ig-like) proteins present in the viral capsid. First discovered in antibody molecules, the Ig domain has since been found in hundreds of different proteins with various functions and appear to be encoded in ~25% of dsDNA phages. The Ig domain, typically 80 amino acids in length, is often involved in interactions with other proteins or ligands. For example, the Ig domains of antibodies interact with antigens, and the poliovirus receptor interacts with poliovirus via an Ig domain on the receptor molecule. The capsid of phage T4 contains 155 copies of an Ig-like protein called Hoc (colored yellow in the image). Deletion of the phage T4 hoc gene reduced binding of the virus to mucin, showing that adherence to mucin requires Ig-like protein domains.

These results demonstrate that a model bacteriophage, T4, attaches to mucus via an interaction between viral Ig-like capsid proteins and mucins. The ability of phages to attach to mucin clearly helps protect cultured cells from bacterial attachment and killing. Bacteriophages may be part of a previously unrecognized mucosal immune defense system. This suggests a symbiotic relationship between phages and metazoan hosts: the phages provide protection to mucosal surfaces, and in turn are provided hosts (bacteria) in which to reproduce. However, additional experiments are required to prove the authors’ conclusion of a “key role of the worldâ€™s most abundant biological entities in the metazoan immune system”.Â It will be necessary to directly demonstrate that phages attaching to mucins in mucus can protect an animal (e.g. mice) from bacterial invasion. This will not be an easy experiment because the phage and bacteria composition of mucus is likely to be complex and continuously changing asÂ mucus is sloughed from cells and new mucins are produced.

Update: Michael Schmidt and I discussed these remarkable findings on episode #59 of the science show This Week in Microbiology.

On episode #179 of the science showÂ This Week in Virology,Â Gertrud joins the TWiVoners to review how dengue virus infection of mosquitoes alters blood feeding behavior, and gene therapy as practiced by parasitoid wasps.

You can find TWiV #179 atÂ www.microbe.tv/twiv.