On episode #290 of the science show This Week Â in Virology,Â Vincent meets up with Janet Butel and Rick Lloyd at Baylor College of Medicine to talk about their work on polyomaviruses and virus induced stress.

On episode #250 of the science show This Week in Virology,Â Vincent and Robert Garcea talked about polyomaviruses. This episode was recorded at the 53rd ICAAC in Denver, Colorado.

You can find TWiV #250 at www.microbe.tv/twiv, or view the video below. 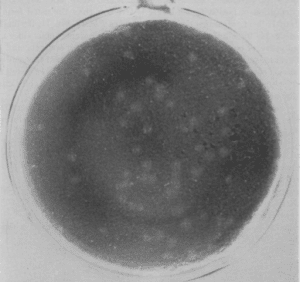 For the second time in a week I note the passing of an important virologist. Renato Dulbecco, together with David Baltimore and Howard Temin, received the 1975 Nobel Prize in Physiology or Medicine for discoveries about how tumor viruses interact with theÂ genetic material of the cell. Dulbecco also devised my favorite virological method, the plaque assay, for determining the virus titer, the number of animal viruses in a sample.

Since the early 1920s bacteriologists had used the plaque assay to quantify the number of infectious bacteriophages (viruses that infect bacteria). Dulbecco noted in 1952 that “research on the growth characteristics and genetic properties of animal viruses has stood greatly in need of improved quantitative techniques, such as those used in the related field of bacteriophage studies.” One limiting factor was the development of suitable animal cell cultures that could be used to determine viral titer. By the 1950s the techniques for reliably producing and propagating human cell cultures were developed, and in 1951 the first immortal human cell line, HeLa, was isolated. Dulbecco took advantage of these advances and showed in 1952 that western equine encephalitis virus formed plaques on monolayers of chicken embryo fibroblasts (figure). Dulbecco also made the important observation that one virus particle is sufficient to produce one plaque. He drew this conclusion from his observation of aÂ linear dependence of the number of plaques on virus concentration. This seminal advance made possible the application of genetic techniques to the study of animal viruses.

Dulbecco’s work on tumor viruses was focused on polyomaviruses – small DNA-containing viruses such as murine polyomavirus and SV40. He found that cells from the natural host of the virus – mice for polyomavirus and monkeys for SV40 – were killed as the viruses replicated and produced new viral progeny. However, these viruses did not replicate in or kill cells from other animals. For example, when hamster cells were infected with murine polyomavirus, no viral replication took place, the cells survived, and a few rare cell were transformed Â – their growth properties in culture were altered and they induced tumors when injected into hamsters. Dulbecco later found that the polyomaviral DNA is a circular, double-stranded molecule; and that in non-permissive cells (in which the virus does not replicate) the viral DNA became integrated into the host cell chromosome. He also suspected that a viral protein called T (for tumor) antigen was a key to cell transformation.

Today we understand why polyomaviruses transform cells in which they do not replicate: infection does not kill these cells, and the rare transformed cells contain only viral DNA encoding T antigen. This protein is needed for viral replication in permissive cells because it drives cell proliferation, activating cellular DNA replication systems that are required for producing more viral DNA. In a non-permissive cell, T antigen drives the cell to divide endlessly, immortalizing it and allowing the accumulation of mutations in the cell genome that make the cells tumorigenic.

While the details of how DNA tumor viruses transform cells were being elucidated, other investigators were attempting to understand how another class of viruses – with RNA genomes – had similar effects on cells. In 1951 a young scientist named Howard Temin joined Dulbecco’s laboratory to study how Rous sarcoma virus (RSV) caused tumors. This virus had been discovered by Peyton Rous in 1911, but would only cause tumors in chickens, limiting progress. In Dulbecco’s laboratory, Temin found that RSV induced transformation of cultured chicken embryo fibroblasts – the same types of cells that were being used to develop the plaque assay for animal viruses. Temin took this transformation assay to his own laboratory, where he reasoned that a DNA copy of the RSV viral genome must be integrated into the chromosome of transformed cells. This led him to discover the enzyme reverse transcriptase in RSV particles, which produces a DNA copy of the viral RNA.

By embracing a new technology for the study of animal viruses – cell culture – Dulbecco set the study of both DNA and RNA tumor viruses on a path that would lead to understanding viral transformation, an achievement recognized by the 1975 Nobel Prize.

On episode #96 of the podcast This Week in Virology, Vincent, Dickson, and Rich continue Virology 101 with a discussion of how viruses with DNA genomes replicate their genetic information. 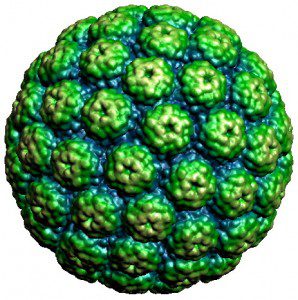 Deep sequencing – which identified a viralÂ contaminant of the rotavirus vaccine Rotarix -Â could have revealed the presence of simian virus 40 (SV40) in the poliovirus vaccine, had the technique been available in the 1950s. Exposure of over 100 million Americans to SV40, and many more worldwide, could have been avoided, as well as the debate about the role of this monkey virus in human cancer.

SV40 was discovered by Maurice Hilleman in 1960 as a contaminant of poliovirus vaccine.Â It was present in batches of both the Salk and Sabin poliovirus vaccines produced and distributed from 1954 to 1963. The source was the rhesus and cynomolgousÂ monkey kidney cells used to produce the vaccine. Even more troubling was the observation that SV40 could cause tumors in hamsters. By 1963 screening procedures were instituted to ensure the absence of SV40 in poliovirus vaccines. Ironically, monkey cells were used for poliovirus vaccine production because it was feared that human cells might contain unknown human cancer viruses. 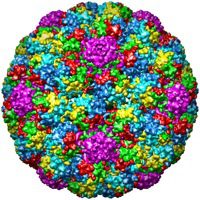 While immunosuppressive therapy can ameliorate a variety of diseases, one unfortunate side effect of the treatment is that it may lead to pathogenic infections by viruses which would otherwise be benign. An example is the brain infection PML which occurs when immunosuppression leads to replication of the polyomavirus JC. How many polyomaviruses do we have to worry about, and how frequently do they infect humans?

There are five known human polyomaviruses: JC and BK, both isolated in 1971, and the more recently discovered KIV, WUV, and MCV (Merkel cell polyomavirus). The percentage of the human population that is infected with these viruses has been addressed by determining whether antibodies directed against the viral capsid protein VP1 are present in sera.

A total of 1501 serum specimens from healthy blood donors were examined.Â The presence of antibody to the viruses – known as seroprevalence – was 82% for BKV, 39% for JCV, 15% for LPV, 55% for KIV, 69% for WUV, and 25 and 42% for two different MCV strains. The sampling error is plus or minus 1%. Seroprevalence of these viruses was also examined in samples from 721 children, and the results were similar to those obtained with adult sera. From this information the authors conclude that polyomavirus infection of humans probably occurs during childhood.

The authors also determined the level of antibodies to a monkey polyomavirus, SV40. This virus was introduced into millions of people as a contaminant of early preparations of inactivated and infectious poliovirus vaccines. Whether or not the virus causes tumors in humans is a matter of scientific and legal controversy. Only 2% of the specimens were positive for antibodies to SV40. The low seroprevalence of antibodies to SV40 suggest that this virus does not circulate extensively among humans.

Given the high seroprevalence of polyomaviruses in humans, it is not surprising that they are significant pathogens in immunosuppressed populations. An important question is why these viruses can peacefully co-exist in many humans without causing disease. Are human polyomaviruses simply passengers, or do they benefit us in some unknown way?