On episode #370 of the science show This Week in Virology, the TWiVomics review ten captivatingÂ virology stories from 2015.

On episode #327 of the science show This Week in Virology, the eTWiVicators review evidence that the HIV-1 group O epidemic began with a single cross-species transmissionÂ of virus from western lowland gorillas. 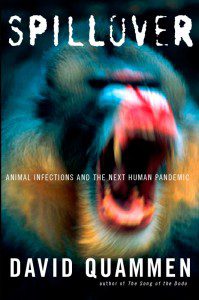 David Quammen, whose bookÂ Spillover was recently published, has been the recipient of a good deal of publicity in the past week. Last Wednesday he participated in a New York Academy of Sciences Symposium called ‘Wrath Goes Viral‘; on Saturday he was profiled in the New York Times (The Subject is Science, the Style is Faulkner), and yesterdayÂ Spillover was reviewed in the Sunday Book Review by Sonia Shah. Publicity for science is always good, but Shah identifies a key shortcoming of the book.

Shah notes that Spillover describes the “unfolding convergence between veterinary science and human medicine, and how veterinary-Â­minded medical experts discover and track diseases that spread across species”, detailing “Quammenâ€™s prodigious, globe-trotting adventures with microbe hunters in the field, trapping bats in southern China and hysterical monkeys in Bangladesh”. But Quammen shies away from explanation, saying that he “would rather dazzle us with the difficulty of the science than help us comprehend it”:

He practically apologizes for having to describe fundamental concepts like the basic reproduction rate, or â€œR0â€ (the number of new infections caused by an initial case), critical community size (the number of susceptible individuals required to sustain transmission of an infectious disease) and the high mutation rate of RNA viruses.Â Câ€™mon. Kate Winslet explained R0 in Steven Soderberghâ€™s film â€œContagionâ€ in 20 seconds. As â€œSpilloverâ€ so richly details, weâ€™re talking about the potential end of the human race here. We can take it.

On page 305, before presenting an equation for R0, Quammen writes “There will be no math questions in the quiz at the end of this book, but I thought you might like to cast your eyes upon it. Ready? Don’t flinch, don’t worry, don’t blink”. I’m not fond of this approach. If you have read this blog or listened to any of my science podcasts, you know that I don’t believe that science needs to be dumbed down for a lay audience.

I’m not sure why Quammen shies away from the details. Perhaps he doesn’t feel qualified to explain science (he was an English major in college), or did not believe it was within the scope of the book (Walter Isaacson calls it a ‘masterpiece of science reporting’.) Fortunately, there are many other places online where you can learn the details of virology (see the sidebar of this blog for some examples), or for that matter, any type of science. Sadly, Quammen does not appear to be aware of any of these sources of good science.

I have a copy ofÂ SpilloverÂ on my desk and when I’m finished reading I’ll have more to say here, and perhaps also on TWiV. The good news is that he had a number of scientists read over the manuscript. At least Quammen doesn’t shy away from fact checking.