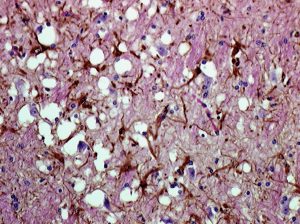 A dairy cow in California is the fourth known American case of mad cow disease, which isÂ caused by prions, infectious agents composed only of protein (the story hit the press the day after my lectureÂ on this type of illness). Unlike viruses, prions have no nucleic acid and no protective coat. But virologists know all about them because, as Stanley Prusiner once said, there was a time when only virologists believed that they existed.

Prions are found in mammals and in fungi, but only in mammals are they infectious and pathogenic. All mammals make normal forms of the prion protein (PrPc) which is found in many tissues including the nervous system. The pathogenic form, called PrPSc, is a structurally altered form of PrPc. The PrPScÂ protein, named after the first prion disease studied, scrapie in sheep, causes PrPcÂ to undergo a structural transformation to the pathogenic form. The PrPScÂ protein becomes deposited in amyloid fibrils in the brain, leading to neurodegenerative diseases known as transmissible spongiform encephalopathies (TSE), after the sponge-like appearance of the brain observed in afflicted animals (image).

There are three different ways to acquire a TSE. One is by infection: a human consumes meat that contains PrPSc, or receives a corneal transplant from a donor with an undiagnosed TSE . The PrPScÂ proteins make their way to the brain where they cause the host’s PrPcÂ to misfold and become the pathogenic PrPSc. The more PrPScÂ that is made, the more the normal PrPcÂ is converted to the pathogenic form. After an incubation period of many years, the host develops an invariably fatal neurodegenerative disease characterized by dementia in humans. There is also a familial form, in which mutations in the gene encoding PrPcÂ are inherited; these cause the PrPcÂ protein to misfold to form the pathogenic form. In the sporadic formÂ PrPcÂ spontaneously converts toÂ PrPScÂ without any known mutation or infection.

This brings us back to the mad American cow, the first in the US since 2006. It died on a dairy farm and was tested for BSE as are 40,00o other cows each year in this country. The reason why this is big news is that back in the 1990s there was an outbreak of human TSE in the United Kingdom caused by consuming beef from animals with BSE. The cows acquired BSE by being fed processed animal byproducts as protein supplements, which unknowingly contained pathogenic prions. Bt the time the disease was detected in cows, contaminated meat had already entered the human food chain. Cows are routinely tested for BSE precisely to avoid a similar outbreak of human TSE.

The dead cow apparently had atypical BSE – that is, it was not a consequence of eating contaminated meat and it was not an inherited disease. Atypical BSE is caused by strains of prions distinct from other forms. This is good news because it means that the feed that the cow was receiving was not contaminated with pathogenic prions. Furthermore, the cow was not destined for meat production; it was a dairy cow that had died and was selected for random sampling.

Could the milk produced by this cow and consumed by humans pose a risk for transmission of a TSE to humans? It is known that ewes with scrapie shed infectious and pathogenic prions in their milk. However cows with BSE have Â much less PrPScÂ accumulation in peripheral tissues, and in particular lymphoid tissues which include the mammary glands. It seems unlikely that cow milk contains prions, but it is a question worth revisiting. Pathogenic prions are highly resistant to heat, ultraviolet irradiation and other extreme conditions, so would certainly survive the pasteurization process.