In early June it was widely reported that the first case of poliomyelitis in 30 years had been identified in Venezuela (see this Tech Times report as an example). Fortunately these reports were incorrect, and Venezuela remains free of polio. Letâ€™s unpack exactly what happened.

END_OF_DOCUMENT_TOKEN_TO_BE_REPLACED

On episode #353 of the science show This Week in Virology, theÂ TWiVniacs discuss twenty-eight years of poliovirus shedding by an immunodeficient patient, and packaging of the innate cytoplasmic signaling molecule cyclic GMP-AMP in virus particles.

Vaccine-associated poliomyelitis caused by the oral poliovirus vaccine is rare, but its occurrence in a healthy, immunocompetent 6-month old child wasÂ highly unusual becauseÂ the child had been previously immunized with two doses of the injected, inactivated poliovirus vaccine (IPV).

The three poliovirus vaccine strains developed by Albert Sabin (OPV, oral poliovirus vaccine) contain mutations which prevent them from causing paralytic disease. When the vaccine is ingested, the viruses replicate in the intestine, and immunity to infection develops. While replicating in the intestinal tract, the vaccine viruses undergo mutation, andÂ OPV recipients excrete neurovirulent polioviruses. These so-called vaccine-derived polioviruses (VDPV) can cause poliomyelitis in the recipient of the vaccine or in a contact. During the years that the Sabin poliovirus vaccines were used in the US, cases of poliomyelitis caused by VDPV occurred at a rate of about 1 per 1.4 million vaccine doses, or 7-8 per year. Once the disease was eradicated from the US in 1979, the only cases of polio were caused by the Sabin vaccine.

To prevent vaccine-associated poliomyelitis, in 1997Â the US switched to an immunization schedule consisting of two doses of IPV followed by one dose of OPV. The US then switched to using IPV exclusively inÂ 2000. The child in this case essentially had a polio immunization course similar to that utilized in the US from 1997-2000: two doses of IPV, one dose of OPV. Why did the child develop poliomyelitis?

One clue comes from the fact that after the switch to an IPV-OPV schedule inÂ 1997, there were still three cases of VAPP in 1998 and three in 1999. Another hint comes fromÂ a study of immune responses in children given multiple doses of IPV. Most of the children receiving two doses of IPV produced antibodies against types 1 and 2 poliovirus (92 and 94%), but only 74% of children produced antibodies against type 3 poliovirus.

The final piece of information needed to solve this puzzle is that the child in this case had vaccine-associated poliovirus caused by the type 3 strain, which was isolated from his feces.

Therefore, the child in this case most likely did not produce sufficient antibodies to type 3 poliovirus after receiving the two doses of IPV. As a consequence, whenÂ he was given OPV, he developed type 3 vaccine-associatedÂ poliomyelitis.

This case of VAPP could have been prevented: the child was born in Canada, and as customary in that country since 1995, he received two doses of IPV. At 5 months of age the child and his family visited China, where his parents decided to continue his immunizations according to the local schedule. China still uses OPV, so that is what the child received.

Three years ago today, on 13 January 2011, the last case of poliomyelitis was reported in India. This achievement represents a remarkable turnaround for a country where control of the disease had for years been extremely difficult. As recently as 2009 there were 741 confirmed cases of polio caused by wild-type virus in India. Being polio-free for three years is certainly a cause for celebration, but not for becoming complacent. Immunization efforts in India must not decline, because wild-type and vaccine-derived polioviruses continue to circulate and pose a threat to any unimmunized individual.

Wild polioviruses – those that have always been circulating in nature – continue to cause disease in Afghanistan and Pakistan, two countries close to India. Pakistan reported 58 polio cases in 2012, and 85 so far in 2013; for Afghanistan the numbers are 37 and 12. But distant countries can also transmit polio: recent outbreaks in the Horn of Africa and in Syria originated in Nigeria and Pakistan, respectively.

According to the World Health Organization, being free of wild polio for three years means that the virus is probably no longer endemic in India. However, WHO does not certify individual countries as polio-free; rather it declares a WHO region polio-free when all countries in the Region have not reported a case of wild polio for 3 years in the face of highly active surveillance. The Americas, the Western Pacific, and European regions have been declared polio-free by WHO. India is part of the South-East Asia region, which also includes Bangladesh, Bhutan, Democratic Peopleâ€™s Republic of Korea, Indonesia, Maldives, Myanmar, Nepal, Sri Lanka, Thailand, and Timor-Leste, none of which have reported a case of polio for 3 years. WHO will decide in March whether to declare this region polio-free. That would leave the regions of Africa and the Eastern Mediterranean as the last known reservoirs of wild poliovirus. 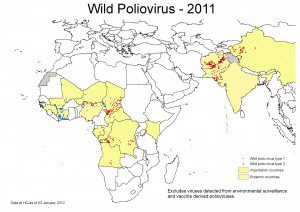 A year has passed since the last reported case of poliomyelitis in India, which occurred on 13 January 2011Â in a two year old girl in Howrah, West Bengal. If no additional cases are reported in the next few weeks (some samples are currently being tested for the virus), then it will mark the first time that India has been polio free for one year.

This achievement represents a remarkable turnaround for India, where control of the disease had for years been extremely difficult. As recently as 2009 there were 741 confirmed cases of polio caused by wild-type virus (as opposed to vaccine-derived virus) in India. The tide turned in 2010 with only 42 confirmed polio cases, and in calendar year 2011 there was just one. That is why the 2011 map marking locations of confirmed wild polio cases in India (see figure) shows only one red dot (paralysis caused by type 1 poliovirus) in the country. The blue dots indicate cases caused by type 3 poliovirus.

The challenge now is to keep India free of polio. The map shows why this will be difficult – there are many red dots (cases of type 1 polio) in neighboring Pakistan and Afghanistan. Poliovirus does not respect national bordersÂ – China had been free of polio since 1999, but now there are red dots in that country. That outbreak was imported from Pakistan. Even the polio cases in more distant countries such as Africa constitute a threat. As long as there is polio somewhere, all countries must maintain extensive immunization programs. Whether or not that will happen depends upon money, determination, and allowing immunization campaigns to proceed without interruption.

Once polio was eradicated from the United States, the only poliomyelitis was caused by the Sabin vaccine. Consequently this country switched to the use of inactivated vaccine in 2000. As other countries eliminate the disease, vaccine-associated poliomyelitis will become more prominent. If eradication of polio is achieved, the world will have to switch to using inactivated poliovaccine.

Yesterday I terminated the last remaining mice in my small colony, including the line of poliovirus receptor transgenic mice that we established here in 1990. Remarkably, I had never written about this animal model for poliomyelitis which has played an important role in the work done in my laboratory.

While I was still working on poliovirus as a postdoctoral fellow with David Baltimore, I became interested in how the virus causes disease. There were no convenient animal models to study poliovirus pathogenesis, so I began to think about the cellular receptor for the virus and how it could be used to make a mouse model for infection. When I moved to Columbia University Medical Center in 1982, I decided to identify the cellular gene for the poliovirus receptor. This work was carried out by the second graduate student in my lab, Cathy Mendelsohn. She identified a gene from human cells that encoded a protein which we believed to be the cellular receptor for poliovirus. When this human gene was expressed in mouse cells, it made

them susceptible* to poliovirus infection (the mouse cells were already permissiveÂ for poliovirus replication). The gene encodes a transmembrane glycoprotein (illustrated) that we called the poliovirus receptor (PVR), later renamed CD155. Over the years we worked extensively on PVR, with the goals of understanding its interaction with poliovirus during entry into the cell. In one project we collaborated with Jim Hogle, David Belnap, and Alasdair Steven to solve the structure of poliovirus bound to a soluble form of PVR. The image of that complex decorates the banner at virology blog and twiv.tv.

Shortly after identifying PVR as the cellular receptor for poliovirus, a new student, Ruibao Ren, joined my lab. For his project I suggested he create transgenic mice with the human gene for PVR. We already knew that synthesis of PVR in mouse cells allowed the complete poliovirus replication cycle. Together with Frank Costantini and JJ Lee, Ruibao produced PVR transgenic mice and showed that they were susceptible to poliovirus infection. The illustration at top left shows a PVR transgenic mouse with a paralyzed left hind limb after poliovirus inoculation.

Poliovirus transgenic mice were used for many years in my laboratory to study how the virus causes disease, and to identify the mutations that attenuate the neurovirulence of the Sabin vaccine strains. A good summary of this work can be found in my review, ‘One hundred years of poliovirus pathogenesis‘. But there is a dark side of this story that I wish to briefly recount. When we first developed PVR transgenic mice, my employer decided to patent the animals. Until the patent issued, we could not share the transgenic mice with other researchers. As a consequence, others developed their own lines of PVR transgenic mice. One of these lines has been qualified by the World Health Organization to determine the neurovirulence of the Sabin vaccine strains. However, Columbia University realized little income from the PVR transgenic mice – such animals cannot be patented in Europe. By patenting the mice, we simply delayed research progress. Because of this experience I am personally very wary about patenting biological discoveries.

There are several reasons why I decided to stop doing research with mice. The cost of housing and breeding mice is very high, nearly $1.00 US per cage per day, and I simply don’t have the funds to support such work. More importantly, no one in my laboratory has any interest in working with mice: the last student to do mouse work left years ago. Although there are many interesting experiments to be done using viruses and mice, that line of work ended for the Racaniello lab on 11 July 2011.