From DukeNUS Medical School, Vincent speaks with Ashley, Sheemei, Eng Eong and Dahai about their careers and their research on flaviviruses and sensing of viral RNA.

All immune responses, from intrinsic to adaptive, need to be regulated – if left on indefinitely they will damage the host. The innate immune response is no exception, and a cellular RNA has been identified that binds to a sensor of viral RNA and regulates the production of interferon (IFN).

END_OF_DOCUMENT_TOKEN_TO_BE_REPLACED

Episode #102 of the podcast This Week in Virology is a conversation about the RNA sensor RIG-I, adenovirus gene therapy, a universal influenza vaccine, and rabies virus, recorded in Munich, Germany at the SFB455Â symposium â€˜Viral offense and immune defenseâ€™.

During a discussion about blogging on the Coast to Coast Bio Podcast, it was suggested that science professors should spend more time writing about their research – by explaining what problems they are trying to solve, how they approach them, and why they are interesting. My goal here at virology blog is mainly to teach virology. But explaining what we do in my virology laboratory can be an effective instructional tool.

The key to innate defenses are cellular proteins – toll-like receptors and cytoplasmic molecules – that can detect viruses and turn on pathways that lead to the synthesis of the antiviral interferons (IFN).

In 2005, I attended a virology meeting in Italy where I learned about two cellular proteins that can sense the presence of viral nucleic acids. I found it absolutely amazing that these cytoplasmic proteins – called MDA-5 and RIG-I – can detect viral RNA as a foreign molecule. When these proteins sense viral RNA, they interact with a mitochondrial protein called IPS-1, which then initiates a signal transduction cascade.

When I returned from that meeting I immediately began experiments to understand how our favorite viruses – poliovirus, rhinovirus, and encephalomyocarditis virus (EMCV) – interact with the innate defense system.Â To our surprise, we found that RIG-I, MDA-5, and IPS-1 are all degraded in cells infected with these viruses. The following figure shows sensing of viral RNAs (green) by these proteins, and the pathways that lead to IFN synthesis. The red arrowheads show which proteins are cleaved in virus-infected cells. 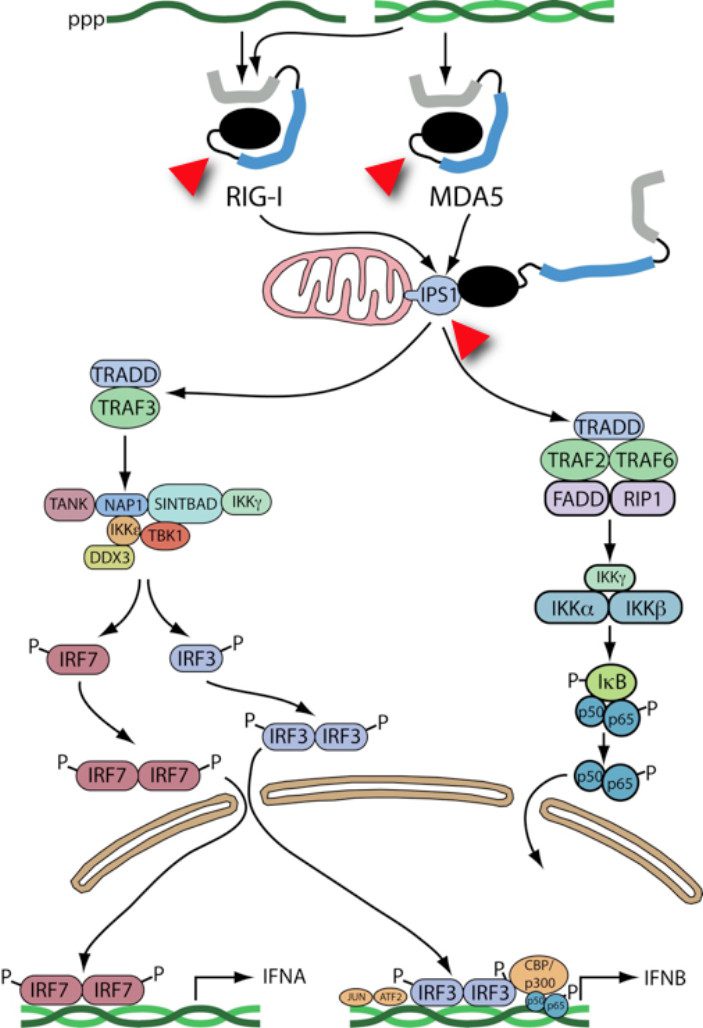 What does this mean? By eliminating these cell proteins, viruses could prevent the innate immune system from functioning properly – they could block synthesis of IFN. But we don’t have any evidence to support this hypothesis. RIG-I, MDA-5, and IPS-1 disappear quite late in infection, perhaps too late to impact IFN production.

A few days after our paper on the cleavage of RIG-I was published, another group reported similar findings. They found that in cells infected with EMCV, RIG-I is cleaved. In mouse cells lacking the RIG-I protein, normal amounts of IFN is produced after EMCV infection. They postulated that the presence of MDA-5 allowed viral infection to be sensed by the innate immune system. Next, they infected MDA-5-deficient cells with EMCV. In this case, no IFN was produced. This result made sense, they reasoned, because not only was MDA-5 absent, but RIG-I was cleaved by viral infection. To support this hypothesis, they infected cells lacking MDA-5 with EMCV, then added back new RIG-I protein to these cells. The addition of RIG-I lead to the synthesis of IFN, supporting their idea that both MDA-5 and RIG-I are important for sensing EMCV infection.

These results are still not conclusive – they do not prove that cleavage of MDA-5 and RIG-I antagonize the innate immune response. To prove this point, it is necessary to produce altered forms of the proteins that cannot be degraded in virus-infected cells. If cleavage of these proteins benefits viral replication, then synthesis of cleavage-resistant forms should lead to production of higher levels of IFN and reduced viral yields in infected cells.

I’m not sure if the results of these experiments would be worth the 6-9 months required for completion. We already know dozens of ways that viruses antagonize the innate immune system. I don’t believe that adding a few more mechanisms will substantially advance our knowledge of how viruses block immune responses. More importantly, I don’t think that these experiments are ‘fundable’. That is, it would be hard to convince the NIH to provide the money to do the experiments. There are other more interesting experiments that I’d like to do. But we’ll save a description of those for another time.

The fact that viruses routinely and frequently cause disease shows that our defense mechanisms are imperfect. This occurs in large part because nearly every viral genome encodes one or more countermeasures to modulate host defenses. Influenza virus is no exception. One of the viral proteins, called NS1, is particularly adept at impairing the synthesis of interferons (IFN) by cells.

The influenza NS1 protein, which is encoded by viral RNA 8, inhibits the innate and adaptive immune responses by multiple mechanisms. The protein blocks expression of type I IFN and inflammatory cytokines, and interferes with T-cell activation. Viral mutants with a truncated NS1 protein cause less severe disease in mice, pigs, horses, and macaques. Such viral mutants induce higher levels of IFN synthesis, and better T-cell activation, than wild type virus. It has been suggested that viruses with truncated NS1 proteins might be good candidates for infectious, attenuated vaccines against influenza.

The main sensor of influenza virus infection is the cytoplasmic protein known as RIG-I (illustrated). This protein resides in the cytoplasm and senses the presence of viral RNA – either double-stranded RNA (dsRNA) or single-stranded RNA (ssRNA) with a 5′-phosphate. When these RNAs bind RIG-I, a signaling cascade is initiated which culminates in the production of IFN. The IFNs in turn activate the synthesis of nearly a thousand cellular proteins which have antiviral properties.

In order to function in the pathway leading to IFN induction, RIG-I must be ubiquinated near its amino terminus, on what is known as the CARD domain. Attachment of ubiquitin to RIG-I is accomplished by a cellular enzyme called TRIM25. In cells infected with influenza virus, RIG-I is not ubiquinated, and therefore IFN is not produced. The NS1 protein of influenza virus specifically inhibits ubiqutination of RIG-I by TRIM25. It does so by binding to TRIM25 and preventing it from forming multimers. A specific amino acid sequence in NS1, threonine-leucine-glutamic acid-glutamic acid, is involved in binding to TRIM25. A virus in which the two glutamic acid residues are converted to alanine is defective in blocking TRIM25-mediated ubiquitination of RIG-I. Consequently, in cells infected with this mutant virus, IFN is produced and viral replication in suppressed. As expected, the virus is much less virulent in mice than wild type virus.

Other TRIM proteins (the name stands for TRIpartite Motif, a reference to the fact that the proteins have RING, B-box zinc finger, and coiled-coil domains) are also involved in antiviral defense. TRIM19 inhibits the replication of many DNA and RNA viruses, while TRIM5Î± blocks replication of HIV. TRIM25 is the first protein of this family whose function has been shown to be inhibited by a viral protein, influenza virus NS1. Given the effectiveness of the innate immune response, it is safe to say that viruses exist only because they encode antagonists of this defense system. It seems likely that viral modulators of TRIM19 and TRIM5Î± await discovery.