Steve Goff returns to TWiV to discuss the work of his laboratory on how retroviral genomes are silenced in infected cells. Vincent travels to Penn State College of Medicine in Hershey, PA to speak with Nick Buchkovich and Leslie Parent about their careers and their work on human cytomegalovirus and retroviruses.

Vincent and Dickson travel to the 44th Retrovirus meeting at Cold Spring Harbor Laboratories, where they speak with John Coffin, Stephen Hughes, Ya-Chi Ho, and Matt Takata about the meeting and their work on HIV-1.

The TWiV team reveal the origin of the poxvirus membrane, and how a retrovirus drove the development of the placenta of a lizard. 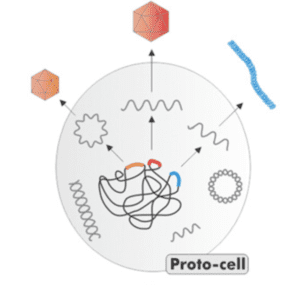 A very common motif among viral capsid proteins is called the single jelly roll,Â made up of eight beta strandsÂ in two four-stranded sheets. Many cell proteins have jelly role motifs, and some form 60-subunit virus-like particles in cells. The extra sequences at the N-termini of viral jelly roll capsid proteins, involved in recognizing the viral genome, likely evolved after the capture of these proteins from cells.