On episode #311 of the science show This Week in Virology,Â Vincent visits the University of Georgia where he speaks with Zhen Fu and Biao He about their work on rabies virus and paramyxoviruses.

You can find TWiV #311, audio and video versions, at www.microbe.tv/twiv.

On episode #264 of the science show This Week in Virology, the TWiVites read listener questions and comments about public engagement in science, vaccines, RNAi, reprogramming CD8 cells to treat cancer, rabies, and much more.

On episode #215 of the science show This Week in Virology,Â Vincent, Alan, and Kathy review the finding that rabies virus infection alters but does not kill neurons, and provide an update on the novel coronavirus in the Middle East.

On episode #201 of the science show This Week in Virology,Â Vincent, Alan, Rich, Dickson, and Kathy answer reader email about rabies, xenotransplantation, poliovirus, Ph.D. programs, mosquitoes, and much more. 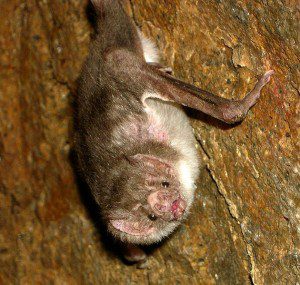 Rabies virus is typically transmitted to humans by the bite of an infected mammal, often a carnivore or a bat. Recently there have been numerous outbreaks of rabies in Peru that have been linked to bites of vampire bats. A study of two communities at risk for vampire bat bites was undertaken to determine whether subclinical infection with rabies virus might occur. Over half of 92 individuals interviewed reported having been bitten by bats. Neutralizing antibodies against rabies virus were detected in 7 of 63 serum samples obtained from this population. Antibodies against the viral nucleoprotein were found in three individuals, two of whom were also positive for viral neutralizing antibodies. All 9 seropositive individuals indicated that they had previously had contact with a bat (aÂ bite, scratch, or direct contact with unprotected skin). One of these individuals had previously received rabies vaccine.

Vincent, Alan, and Rich review an outbreak of rabies in arctic foxes and reindeer in Norway, and a prion that makes you go antiviral.