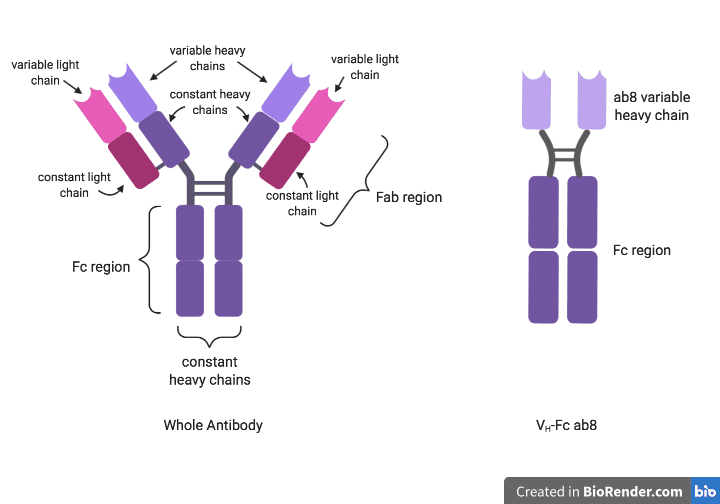 In an effort to identify anti-SARS-CoV-2 antibodies suitable for preventing and treating SARS-CoV-2 infection, the authors of a recent publication screened 100 billion different anti-SARS-CoV-2 antibody candidates for their ability to bind and/or neutralize SARS-CoV-2. This eventually led to the discovery of “ab8,” an antibody fragment consisting of a variable heavy (VH) region and having particularly potent SARS-CoV-2 binding specificity and neutralization activity. To increase the binding avidity of ab8 (i.e., the stability of its interaction with an antigen) and extend its longevity in the human body, the authors fused this fragment to the Fc domain of human IgG1, an abundant and stable type of human antibody. This produced the molecule hereinafter referred to as “VH-Fc ab8″ (right side of Figure).

On episode #220 of the science show This Week in Virology,Â Vincent, Rich, Alan, and Kathy discuss regulation of influenza virus replication by splicing, and the bacteriophage T7 random walk.

On episode #30 of the science show This Week in Microbiology, Vincent, Elio, and Michael review how a toxin from Burkholderia pseudomallei inhibits protein synthesis, and the role of the gut microbiome in modulating insulin resistance in mice lacking an innate immune sensor.

You can find TWiM #30 at microbeworld.org/twim. 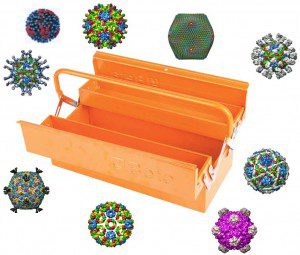 Sequence Searcher is a Java program that allows users to search for specific sequence motifs in protein or DNA sequences. For example, it can be used to identify restriction enzyme cleavage sites or find similar sequence patterns among multiple sequences. Most searches run in a few seconds.

Sequence Searcher is part of the Virology.ca suite of programs available at the University of Victoria.

Some of the key features of Sequence Searcher include:

Regular expression allows for inputs of precise motifs along with considerable user-specified flexibility at specific positions. 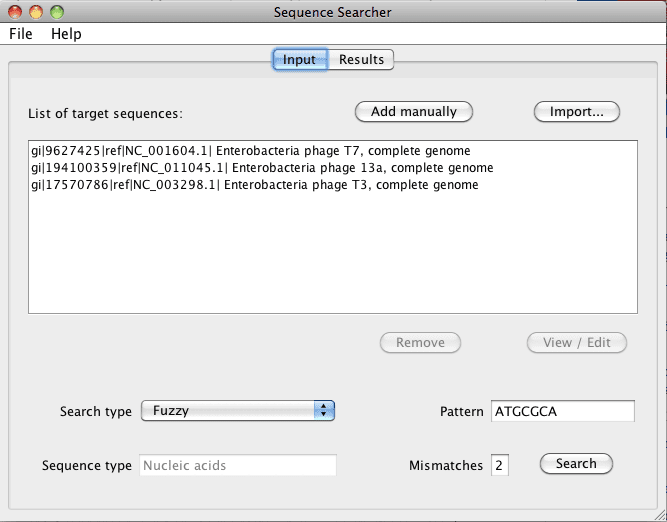 Figure 1. The input tab is where you can import DNA or protein sequences (must be in FASTA format) and type in the specific pattern to search within in the sequence(s). The search type can be selected as â€œRegular expressionâ€ or â€œFuzzyâ€ by using the drop down menu. 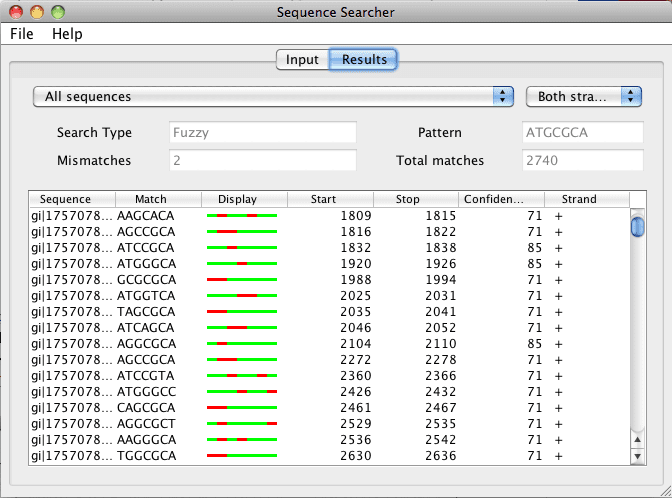 Figure 2. When a search has been completed, the results tab is presented in a table format. The results in the table can be sorted depending on the column header (sequence, match, start, stop, confidence, and strand). The results can also be filtered by sequence and strand by selecting the drop down menus at the top.

Generating multiple sequence alignments (MSA) is one of the most commonly used bioinformatics techniques. The â€œsequencesâ€ to be compared can be DNA (promoters, genes, genomes) or proteins. Note that the length and number of sequences to be aligned has an impact on the methods (algorithms) that can be used; what is suitable for aligning 20 proteins probably wonâ€™t work for alignment of 5 poxvirus genomes (200 kb each).

So you see, there lots of options (did you say: â€œtoo many!â€?). Further confusion may arise because 1) the same algorithm may be used in many different software programs, and 2) referencing a software package may give no clue to the algorithm used. For many molecular biologists, Clustal is synonymous with sequence alignment. However, newer algorithms such as T-Coffee and MUSCLE are often offered in current software packages, and may be faster and more accurate.

In this set of posts, Iâ€™ll provide some information on favorite general MSA tools (that are free) that should be useful to the average molecular virologist. The lists noted above provide a multitude of tools, but many are for specific analyses.