Prions are not viruses – they are infectious proteins that lack nucleic acids. Nevertheless, virologists have always been fascinated by prions -Â they appear in virology textbooks (where else would you put them?) and are taught in virology classes. I’ve written about prions on this blogÂ (five articles, to be exact – look under P in the Table of Contents) and I’m fascinated by their biology and transmission. That’s why the newly solved structure of an infectious prion protein is the topic of the sixth prion article at virology blog.

The structure of the normalÂ PrPCÂ protein, solved some time ago, revealed that it is largely alpha-helical with little beta-strand content. The structure of PrPScÂ protein has been elusive, because it forms aggregates and amyloid fibrils. It has been suggested that the PrPScÂ protein has more beta-strand content than the normal protein, but how this property would lead to prion replication was unknown. Clearly solving the structure of prion protein was needed to fully understand the biology of this unusual pathogen.

The structure of PrPScÂ protein has now been solved by cryo-electron microscopy and image reconstruction (link to paper). The protein was purified from transgenic mice programmed to produce a form of Â PrPScÂ protein that is not anchored to the cell membrane, and which is also underglycosylated. The protein causes disease in mice but is more homogeneous and forms fibrillar plaques, allowing gentler purification methods.

The structure of this form of theÂ PrPScÂ protein reveals that it consists of two intertwined fibrils (red in the image) which most likely consist of a series of repeated beta-strands, or rungs, called a beta-solenoid. The structure provides clues about how a pathogenic prion protein converts a normalÂ PrPCÂ into PrPScÂ . The upper and lower rungs of beta-solenoids are likely the initiation points for hydrogen-bonding with new PrPCÂ molecules – in many proteins with beta-solenoids, they are blocked to prevent propagation of beta-sheets. Once added to the fibrils, the ends would serve to recruit additional proteins, and the chain lengthens.

TheÂ structure of PrPScÂ protein provides a mechanism for prion replication by incorporation of additional molecules into a growing beta-solenoid. I wonder ifÂ incorporation into fibrils is the sole driving force forÂ converting PrPCprotein into PrPSc, or if PrPCÂ is conformationally altered before it ever encountersÂ a growing fibril.

Many microbes live in extreme environments, encountering conditions that are very hot, very cold, highly acidic, or very salty. The viruses that infect such microbes must also be able to retain infectivity in extreme conditions. How do they do it?

Clues come from the observations that the genomes of viruses that infect Archaea in extreme geothermal environments encode proteins that have never been seen before. The idea is that such unusual proteins must endow theseÂ viruses with the ability to maintain infectivity under extreme conditions.

The hosts of Rudiviruses (rudi=small rod in Latin), the Archea Sulfobolus islandicus, live at high temperatures (80Â° C) and low pH (3.0). These non-enveloped viruses consist of double-stranded DNA wrapped in a helical manner with thousands of copies of a 134 amino acid protein (illustrated; image credit). The three-dimensional structure of Sulfobolus islandicus rod-shaped virus 2 (SIRV2) reveals a new type of organization of virus particles, and provides clues about how it retains infectivityÂ in extreme environments.

Resolution of the SIRV2Â structure reveals that it consists of dimers of a single protein which forms helices that are tightlyÂ wrappedÂ around the DNA genome. The result is a coiled DNA protected by a coat of protein that stabilizes and protects the genome. Without DNA, over half of the capsid protein is unstructured. Only inÂ the presence of DNA does the viral protein form an alpha helix that wraps around the nucleic acid.

The DNA genome of SIRV2 is in the A-form, in contrast to B-form DNA which is found in most other organisms. The two types of DNA differ in their geometry and dimensions. It was previously thought that A-DNA occurs only when the nucleic acid is dehydrated.

These two usual properties of SIRV2 are also found in gram positive bacteria which form desiccation and heat resistant spores when starved of nutrients. SporulationÂ is accompanied by a change in the bacterial genome from B-DNA to A-DNA, which is caused by the binding of small acid-soluble proteins. Like the SIRV2 capsid protein, small acid-soluble proteins of spore-forming bacteria are unstructured in solution, and become alpha helices when bound to DNA. These observations suggest that binding of theÂ SIRV2 capsid protein changes the viral DNA to the A-form, conferring stability in extreme environments. 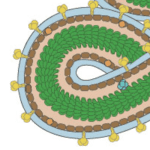