On episode #276 of the science show This Week in Virology,Â Vincent meets up with Susan Baker and Tom Gallagher at Loyola University to talk about their work on coronaviruses.

On episode #267 of the science show This Week in Virology,Â Vincent, Alan, Rich and Kathy review a protease essential for influenza pathogenesis in mice, and directionality of rhinovirus RNA exit from the capsid. 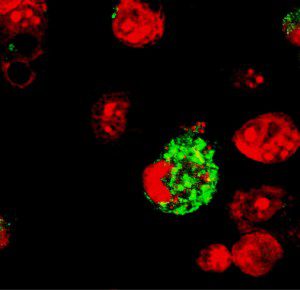 Vincent and Dickson discuss immune evasion by the cruzain protease of T. cruzi, and novel tetraspanin antigens of S. japonicum.

Send your questions and comments (email or mp3 file) to twip@microbe.tv.

Subscribe to TWiP (free) in iTunes, at the Zune Marketplace, by the RSS feed or by email 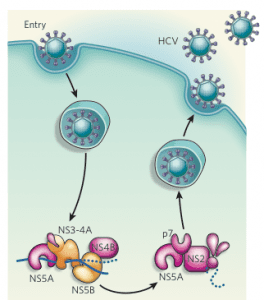 The influenza virus hemagglutinin (HA) is the viral protein that attaches to cell receptors. The HA also plays an important role in the release of the viral RNA into the cell, by causing fusion of viral and cellular membranes. HA must be cleaved by cellular proteases to be active as a fusion protein.

The HA on the influenza virion is aÂ trimer: it is made up of three copies of the HA polypeptide.Â The cleavage site for cell proteases on the HA protein is located near the viral membrane. 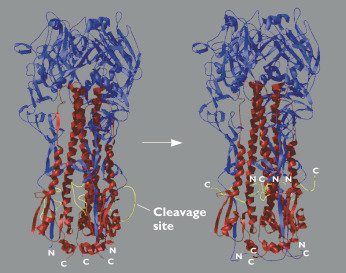 In the diagram, the globular head of the HA protein, which attaches to cell receptors, is at the top, and the viral membrane is at the bottom. For clarity, only one HA cleavage site is labeled. The uncleaved form of the protein is called HA0; after cleavage by a cellular enzyme, two proteins are produced, called HA1 (blue) and HA2 (red). The two subunits remain together at the surface of the virus particle. The new amino(N)-terminal end of HA2 that is produced by cleavage contains a sequence of hydrophobic amino acids called a fusion peptide. During entry of influenza virus into cells, the fusion peptide inserts into the endosomal membrane and causes fusion of the viral and cell membranes. Consequently, the influenza viral RNAs can enter the cytoplasm. The fusion process is described in a previous post.

If the HA protein is not cleaved to form HA1 and HA2, fusion cannot occur. Therefore influenza viruses with uncleaved HA are not infectious. Cleavage of the viral HA occurs after newly synthesized virions are released from cells. Influenza viruses replicate efficiently in eggs because of the presence of a protease in allantoic fluid that can cleave HA. However, replication of many influenza virus strains in cell cultures requires addition of the appropriate protease (often trypsin) to the medium.

In humans, influenza virus replication is restricted to the respiratory tract, because that is the only location where the protease that cleaves HA is produced. However, the HA protein of highly pathogenic H5 and H7 avian influenza virus strains can be cleaved by proteases that are produced in many different tissues. As a result, these viruses can replicate in many organs of the bird, including the spleen, liver, lungs, kidneys, and brain. This property may explain the ability of avian H5N1 influenza virus strains to replicate outside of the human respiratory tract.

Like the HA proteins of highly pathogenic H5 and H7 viruses, the HA of the 1918 influenza virus strain can also be cleaved by ubiquitous cellular proteases. Consequently, the virus can replicate in cell cultures in the absence of added trypsin.

The H5 and H7 HA proteins have multiple basic amino acid residues at the HA1-HA2 cleavage site which allows cleavage by widely expressed proteases. But the 1918 H1 HA does not have this feature. Nor does the 1918 N1 help recruit proteases that cleave the HA, a mechanism that allows the A/WSN/33 influenza virus strain to multiply in cells without trypsin. An understanding of how the 1918 H1 HA protein can be cleaved by ubiquitous proteases is essential for understanding the high pathogenicity of this strain.