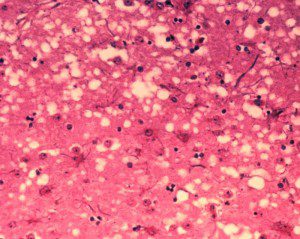 The other day I learned that a friend’s relative had recently succumbed to Creutzfeldt-Jacob disease (CJD). He told me that he had been diagnosed with the ‘infectious’ form of the disease. What does this mean?

CJD is one of several neurological diseases known as transmissible spongiform encephalopathies (TSEs). These diseases are characterized by progressive mental and physical degeneration, and by the presence of microscopic holes in the cerebral cortex (hence ‘spongiform’). The disease was described in humans in the 1920s, but was not shown to be transmissible until Carleton Gajdusek‘s work on kuru in Papua New Guinea. The disease is caused by a novel infectious agent, called a prion by Stanley Prusiner. Prions do not contain nucleic acid; rather it is the misfolding of this protein that causes the disease. CJD is extremely rare, occuring in 1 per million humans per year.

There are three major kinds of CJD. In the sporadic form, which accounts for about 85% of all cases, a spontaneous mutations likely occurs in the prion gene. About 15% of the cases are caused by inherited autosomal dominant mutations; 30 different amino acid changes leading to the disease have been described to date. The remainder are transmitted iatrogenically: originating as a result of medical care. These include the use of contaminated growth hormone derived from human cadavers, implantation of contaminated dura mater grafts, using electroencephalographic electrodes, and surgery with contaminated instruments. Prions are probably not transmitted by aerosol or casual contact. However, they may be transmitted through contact with infected tissue or body fluids. A major problem is that prions are not inactivated by autoclaving or boiling.

Variant CJD (vCJD), first described in March 1996, affects younger patients (average age 29 years, versus 65 years for CJD), has a longer duration of illness (median of 14 months versus 4.5 months) and is linked to consumption of food from cattle with bovine spongiform encephalopathy (BSE), or mad cow disease. More than 184,000 cows with BSE, and over 162 causes of human vCJD have been identified in the United Kingdom.

My friend’s relative died of infectious CJD – but he had no history of a medical procedure or transplant consistent with transmission of the disease. He worked in a hospital in New York City – but as a physical therapist, and therefore would not have had direct contact with body fluids. His age – less than 50 – is the best evidence that he had vCJD. When and where he had eaten contaminated food will never be known – perhaps on a trip to Europe in the past 5 years. What we do know, however, is that cases of vCJD in the US are extremely rare – only three have ever been reported. Now there are four.

This Week in Virology #12 has been posted at twiv.tv.

In this episode, Vincent, Alan, and AngelaÂ discuss Kuru, prions in milk, ancient lentiviruses found in the chromosomes of lemurs, a respiratory syncytial virus vaccine failure in the 1960s, and recent outbreaks of H5N1 influenza in chickens.

Virologist D. Carleton Gajdusek, who was awarded the 1976 Nobel Prize in medicine for unraveling the nature of the prion disease Kuru, has died, as reported by the New York Times.

Gajdusek’s work on Kuru, a fatal encephalopathy found in the Fore people of New Guinea, proved that human transmissible spongiform encephalopathies (TSEs) could be transmitted among humans. This group of rare, slow diseases now includes Creutzfeldt-Jakob disease, Gerstmann-Straussler syndrome in humans, as well as bovine spongiform encephalopathy (BSE, or mad cow disease) and scrapie in sheep and goats. These disorders are rare, but always fatal. Gajdusek’s contribution was to understand that the fatal encephalopathy affecting the Fore people was spread among women and children by ritual cannibalism of the brains of deceased relatives. The disease stopped when cannibalism was discontinued.Â

Subsequent work by others showed that the infectious agents of TSEs are highly unconventional because they lack nucleic acid genomes. Stanley Prusiner called the agent of scrapie a ‘prion’ and suggested that an misfolded form of the protein causes the fatal encephalopathy. The genomes of many animals, including humans, carry a gene calledÂ prnpÂ (encoding the PrP protein) which is essential for the pathogenesis of TSEs. In the simplest case, the misfolded PrP protein (PrPsc) converts normal PrP protein to more copies of the pathogenic form. The altered protein may be acquired by infection, by inheritance of the prnp gene with an autosomal mutation, or sporadically. It is believed that Kuru was established in the small Fore population when the brain of an individual with sporadic CJD was eaten.

I met Dr. Gajdusek briefly in the 1980s when he presented a seminar at Columbia. We were in a room alone for about 5 minutes, awaiting the arrival of other participants in the post-seminar dinner. In that short time it became clear that he was extremely intelligent, but not at all interested in my work on poliovirus, much to my disappointment.