This hypothesis is based on the notion that viruses which kill their hosts too quickly are not efficiently transmitted, and are therefore removed by selection. However a vaccine that prevents disease, but not viral replication in the host, would allowÂ virulent viruses to be maintained in the host population. It has been suggested that in this scenario, viruses with increased virulence would be selected if such a property aids transmission between hosts.

This long preamble is an introduction to a series of findings which are purported to support the idea that permissive vaccines (the authors call them â€˜leakyâ€™ and â€˜imperfectâ€™ vaccines but I dislike both names because they imply defects) can lead to the selection of more virulent viruses. The subject of the paper is Marekâ€™s disease virus (MDV), a herpesvirus that infects chickens. MDV is shed from feather follicles of infected chickens and is spread to other birds when then inhale contaminated dust. Vaccines have been used to prevent MDV infection since the early 1970s. These vaccines prevent disease, but do not block viral replication, and vaccinated, infected birds can shed wild type virus. The virulence of MDVÂ has been increasing since the 1950s, initially from a paralytic disease, to paralysis and death. The authors wonder if the use of permissive Marekâ€™s vaccines has lead to the selection of more virulent viruses.

The experiments are well done and the conclusions are clear: more virulent Marek’s disease viruses replicate longer in vaccinated than unvaccinated chickens, and can be readily transmitted to other chickens. But these results do not prove that more virulentÂ MDV arose because of permissive vaccines. Nor do the results prove in general that leaky vaccines lead to selection of more virulent viruses. The results simply show that a vaccine that does not prevent replication will allow transmission of virulent viruses.

The authors note that most human vaccines do prevent replication of infecting virus. They do not mention the one important exception: the Salk poliovirus vaccines. People who are immunized with the Salk vaccine can be infected with poliovirus, which will then replicate in the intestines, be shed in the feces,Â and transmitted to others. This behavior has been well documented in human populations, yet the virulence of poliovirus has not increased for the 60 years during which the Salk vaccine has been used.

On episode #336 of the science show This Week in Virology, the TWiVsters explore mutations in the interferon pathway associated with severe influenza in a child, outbreaks of avian influenza in North American poultry farms, Ebolavirus infection of the eye weeks after recovery, and Ebolavirus stability on surfaces and in fluids.

On episode #230 of the science show This Week in Virology,Â Vincent, Rich, Alan and Kathy review H7N9 infections in China, the debate over patenting genes, and receptor-binding by ferret-transmissible avian H5 influenza virus.

We diagnosed avian influenza A H7N9 in all four patients (who were epidemiologically unlinked), two of whom died and two of whom were recovering at the time of writing. All patients had histories of occupational or wet market exposure to poultry. The genes of the H7N9 virus in patient 3’s isolate were phylogenetically clustered with those of the epidemiologically linked wet market chicken H7N9 isolate.Â These findings suggest sporadic poultry-to-person transmission.

The four patients had occupational contact with poultry: one was a chef, one slaughtered and cooked live market poultry, and two bought live market poultry. Each had contact with poultry 3-8 days before onset of disease, and all were positive for influenza H7N9 virus by polymerase chain reaction of sputum or throat swab samples (virus was cultured from three of the four patients). Two of five pigeons and four of 20 chickens from two different wet markets were also positive for influenza H7N9 virus. Sequence analysis of virus recovered from patient 3 revealed that the HA and NA genes are nearly identical with those of two viruses isolated from epidemiologically linked chickens (1673 of 1683 bases for HA, 1394 of 1398 bases for NA).

While these H7N9 infections might have been acquired from poultry, the origin of other infections in different areas of China (>100) is unclear. According to the Ministry of Agriculture, as of 26 April 2013, only 46Â of the 68,060 samples collected from poultry markets, habitats, farms and slaughterhouses across the country have tested positive for H7N9 virus, and none of these positive samples have been from poultry farms. 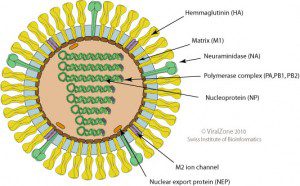 On episode #227 of the science show This Week in Virology,Â the complete TWiV team reviews the controversial publication of the HeLa cell genome, a missing vial of Guanarito virus in a BSL-4 facility, and human infections with avian influenza H7N9 virus.