On episode #208 of the science show This Week in Virology,Â Vincent is joined by special guest Jon Yewdell to discuss solutions for ending the current crisis in American biomedical research. 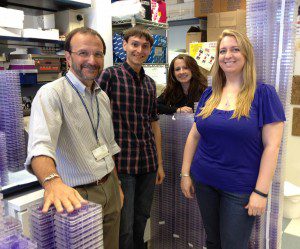 There is one area of research that has received the most attention in my laboratory, and on which we have published most extensively: the interaction of viruses with cell receptors. Towards the end of my stay in the Baltimore laboratory I became interested in how poliovirus attaches to and enters cells. Â I came to Columbia with a strong interest in identifying the cell receptor for poliovirus, which we subsequently achieved.Â This finding lead to a series of studies on virus attachment to cells and virus entry. We produced transgenic mice susceptible to poliovirus, and used them to study aspects of poliovirus replication and pathogenesis, including how the virus attaches to its cellular receptor, regulation of viral tissue tropism, and the basis for attenuation of the Sabin vaccine strains.

This story would not be complete without mentioning my foray into science communication. I have written a virology textbookÂ andÂ a blog about viruses, and began three science podcasts, including This Week in Virology, This Week in Parasitism, and This Week in Microbiology. My use of social media to teach microbiology to the world has been documented in a Social Media and Microbiology Education and in my Peter Wildy Prize Address.

Counting my time here, together with my Ph.D. and postdoctoral years, I’ve been working on viruses for 37 years. I do not know how much longer I will be doing the same, but it’s safe to say that it won’t be for another 37 years. But whenever I stop directing virology research, I will continue to write, podcast, and teach – you can expect nothing less fromÂ Earth’s virology professor.

On episode #194 of the science show This Week in Virology,Â Vincent returns to Madison, Wisconsin and meets with postdocs to discuss their science and their careers.

On episode #189 of the science show This Week in Virology,Â Vincent returns to the Centre for Virus Research at the University of Glasgow and meets with postdocs to discuss their science and their careers.