We have spent over a week discussing the effects of polymerase error rates on viruses. RNA viruses have the highest error rates in nature, a property that is believed to benefit the viral population. For example, selective pressure from the immune system or antiviral drugs may lead to changes that are beneficial for the population. In fact, it has been hypothesized that high error rates are required for survival of RNA viruses in complex environments. The isolation of a poliovirus mutant with an RNA polymerase that makes fewer errors during replication made it possible to test this hypothesis.

Infection of an animal host poses perhaps the greatest challenges to viral propagation. Transmission, entry, host defenses, tissue diversity and anatomical restrictions all are serious obstacles to the ability of a virus to replicate, disseminate, and successfully spread to other hosts. Therefore the effect of viral diversity is most stringently tested in infection of an animal.

In these experiments, mice were inoculated with the poliovirus mutant containing the G64S amino acid change in the viral RNA polymerase that causes enhanced fidelity. Infection of mice with poliovirus typically leads to symptoms of poliomyelitis that are similar to those in humans. Compared with the wild-type parental virus, the G64S mutant was less pathogenic: it caused significantly less paralysis and lethality. This effect could be a consequence of restricting the viral quasispecies, or a replication defect in mice caused by the G64S mutation. To distinguish between these possibilities, the G64S mutant was propagated in cells in the presence of a mutagen, a procedure which expanded the number of viral mutants. This treatment – basically expanding the quasispecies – lead to a significant increase in lethality of the G64S virus, to nearly the same extent as wild type virus.

Why would a less complex quasispecies lead to reduced pathogenicity? Viral growth and spread in an animal likely requires a diverse viral population, comprising many mutants, which can replicate efficiently in the many different cell types in an animal. Support for this idea comes from a competition experiment in which the poliovirus G64S mutant was mixed with wild type virus and inoculated into the leg muscle of a mouse. Several days later the mice were sacrificed and the virus that had reached the brain was characterized.Â  The results showed that both wild type and the G64S virus could replicate in muscle, but the mutant virus spread to the brain less frequently.

These results show that mutations do benefit viral populations, especially in complex environments such as an animal. The ability to produce a quasispecies may allow virus populations to respond to the different environments encountered during spread between hosts, within organs and tissues, and in response to the pressure of the host immune response.

We’ll shortly return to influenza virus replication, but I hope you have been able to follow what to many must be a somewhat arcane discussion. From the silence I suspect that I might have lost some of you – it might help to go back over some of the posts. I’ll try to put up an index of some sort to make it easier to find articles. The blog format isn’t great when it comes to finding older material – once posts scroll off the bottom of the page, they don’t receive further notice. 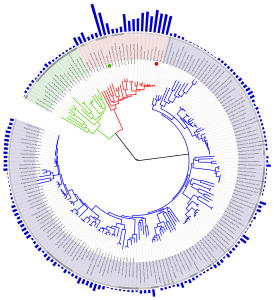 Are viruses living entities? I don’t believe so, but it’s an engaging question for debate. On a recent episode of “This Week in Virology” we concluded that it’s somewhat of a futile argument because everyone has their own view; perhaps our time is better spent studying viruses than discussing whether or not they are alive. The authors of ‘Ten reasons to exclude viruses from the tree of life’ cogently disagree:

We believe that considering viruses alive or not is not just a matter of opinion, contrary to a commonly held view, but rather is a matter of inference and logic starting from any given definition of life

Following is my distillation of why the authors believe that viruses are not alive, and why they do not represent ancient lineages of the tree of life.

1. Viruses are not alive
Throughout history there have been many definitions of life. Viruses do not meet the criteria for any of them.Â  They lack any form of energy, carbon metabolism, and cannot replicate or evolve. They are reproduced only within cells, and they also evolve within cells. Without cells, viruses are “inanimate complex organic matter”.

2. Viruses are polyphyletic
In a phylogenetic tree, the characteristics of members of taxa are inherited from previous ancestors. Viruses cannot be included in the tree of life because they do not share characteristics with cells, and no single gene is shared by all viruses or viral lineages. While cellular life has a single, common origin, viruses are polyphyletic – they have many evolutionary origins.

3. There are no ancestral viral lineages
No single gene has been identified that is shared by all viruses. There are common protein motifs in viral capsids, but these have likely come about through convergent evolution or horizontal gene transfer.

4. Because today’s viruses infect phylogenetically distant hosts doesn’t mean that they are ancient
It cannot be proven that early viruses appeared along with the first cells. The problem is that viruses move readily between diverse hosts. Consequently the ability of a virus to infect a particular species could lead to false conclusions about the ancient origin of viruses.

5. Viruses don’t have a structure derived from a common ancestor
Cells obtain membranes from other cells during cell division. According to this concept of ‘membrane heredity’, today’s cells have inherited membranes from the first cells that evolved, and provides evidence that cells are derived from a common ancestor. Viruses have no such inherited structure.

6. Viral metabolic genes originate from cells
Many viral genomes encode proteins involved in energy, carbon, and cellular metabolism. It has been argued that the presence of these genes indicates that viruses are ancestral to cells. Unfortunately, metabolic genes are not present in the ancestors of these viruses. This finding makes it difficult to argue that viruses predate cells.

7. Viral translation genes originate from cells
The mimivirus genome harbors genes encoding elements of the protein synthesis machinery. This observation has been interpreted to mean that viruses did not always rely on cells for translation. However, sequence analysis indicates that these genes are derived from cells by horizontal gene transfer.

8. Viruses steal genes from cells
Viral genomes encode many genes that have no homologues in cells. It has been suggested that viruses influence evolution of cells by donating new genes. Sequence analysis has failed to provide support for this hypothesis. Viruses are ‘gene robbers, not gene inventors and massive gene suppliers’.

9. Most gene transfer goes from viruses to cells
The movement of genes is mainly in the direction of cells to virus. Transfer in the reverse direction is minimal. Therefore viruses have not had a significant role in shaping the gene content of cells. This conclusion is paradoxical because viral genomes are the most abundant on earth.

10. Just because viruses are simple doesn’t mean that they are old
One view of evolution is that it is a process by which simple organisms become more complex. The simplicity of many viruses lead to their placement at the origin of life. This long-standing hypothesis ignores the fact that viral genomes are subject to selective pressure to maintain minimal size to ensure rapid replication rates. The authors conclude that viral simplicity is a consequence of parasitism, not antiquity.

Even though viruses are not living and should not be included in the tree of life, they play an important role in evolution of their cellular hosts by regulating population and biodiversity.

Are you convinced by these arguments? Post a comment and let us know whether you think viruses or living or not.